The Wall Street Journal looks at Jack White, the businessman. Included online is this little video wherein the Dirtbombs‘ Ben Blackwell leads us on a tour of the vinyl pressing plant:

Pretty cool to see the records getting stamped, but how long has Blackwell been such a long-haired bearded hippy who can’t tie a tie? You’d think Jack would insist on his spokespeople looking sharp! GLONO interviewed Ben back in 2002 when he was still punk.

In other Third Man news, tomorrow (July 21) is the last day to sign up for the Platinum Service area of The Vault where for $20 a month you get a 180-gram vinyl mono mix of Icky Thump, a Dead Weather 7-inch, and a t-shirt. After tomorrow, membership will be closed until October.

Video: The Dead Weather – “Treat Me Like Your Mother”

Directed by Jonathan Glaze, featuring Jack White and Alison Mosshart playing with guns in an abandoned lot in a dusty suburban subdivision. Good thing they’re zombies (which would explain the paleness, I suppose), or something…

The New York Times checks out Jack White‘s new band, the Dead Weather‘s first public show at the Bowery Ballroom on Tuesday. First of all, is that the best photo they could get? It’s got a fan’s head in the corner. Or maybe the photographer’s thumb? Who knows, but it’s a completely mediocre shot. Can’t the Times afford to hire professionals anymore? Sheesh. Go on ahead and get right up front, dude — you’re with the New York freaking Times! 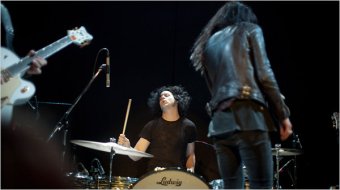 MP3: The Dead Weather – “Hang You From the Heavens” (courtesy of nytimes.com) 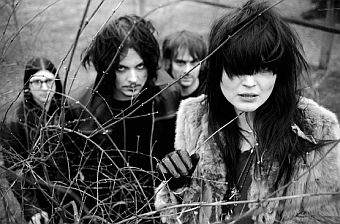 Jack White‘s got another new band. Rolling Stone attended an invite-only preview in Nashville and has the full report:

The new band takes White from the front of the stage back behind the drum kit, while the Kills’ Alison Mosshart mostly handles singing duties. The two are joined by White’s fellow Raconteur Jack Lawrence on bass and former touring Raconteur/Queen of the Stone Age Dean Fertita on guitar. […]

The album, Horehound, is due in June. You can stream a couple of songs—”Hang You from the Heavens” and “Are Friends Electric?”—from the band’s website. Jack White is starting a “vinyl record label” as well. More details at the Los Angeles Times. Could be interesting…