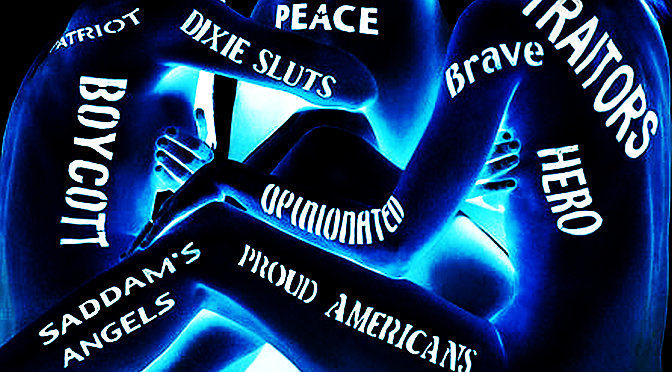 END_OF_DOCUMENT_TOKEN_TO_BE_REPLACED

Me First and the Gimme Gimmes cover the Dixie Chicks: “Goodbye Earl” from Love Their Country, due October 17 on Fat Wreck Chords. Via punknews.

Three years ago, the queens of country cross-over, the Dixie Chicks, alienated the country music world with a rather inocuous comment about President George W. Bush. The comment, made just days before the launch of Operation Iraqi Freedom, brought the trio a world of trouble and cast them as traitors in the eyes of many country fans. With a new album due this week, anyone who thinks the Chicks are ready to repent and play nice had better think again.

When the Dixie Chicks debuted in 1990 with their independently released Thank Heavens for Dale Evans nobody could have guessed just how independent the future chart dominatrices would be. The group that helped push the later-day country crossover craze of the late 90s and establish themselves as the queens of MOR hits has become a firebrand of independence and integrity—and it all started with an off-the-cuff remark in a foreign country on the eve of war.

END_OF_DOCUMENT_TOKEN_TO_BE_REPLACED

“We need to stop giving monopolies to big radio station owners who kick the Dixie Chicks off the air because they don’t agree with their political philosophy.” — Howard Dean, presidential candidate.

“I grow old, I grow old / I shall throw out my Dixie Chicks discs.” — Apologies to T.S. Eliot

Although it is not nice to characterize people broadly because of some attribute, it may be unavoidable in this case. Old people are, indeed, crabby. (Author’s note: Age is a relative thing.) VH1 conducted a poll of Americans. Americans ranging in age from 20 to 50+. A telephone pole with a random selection of respondents, not a “Dial this special 900 number and let us know what your think, or go to our website and log on to express your opinion.” More of a straight poll, the likes of which are typically reported by media that don’t produce or program “a wide variety of music-based series, specials, live events and acquisition-based programming that keeps viewer in touch with the music they love.” (Acquisition-based programming? Is that like the Home Shopping Network?)

END_OF_DOCUMENT_TOKEN_TO_BE_REPLACED

Celine Dion, “God Bless America” – The woman has an extremely large, extremely froggy voice, a husband whose first job was as a deckhand on Sir Walter Raleigh’s frigate, a promotional contract with Daimler-Chrysler, and an irritating French-Canadian accent. While all of these things bother me, it’s the last two that REALLY cream my brie. I mean, did the CFL get Mariah Carey to sing “Oh, Canada” at the Gray Cup? And as Chrysler bought ad time during the Super Bowl, was there some back-end hanky panky going on to install the company’s newest spokeswoman onstage? (This paragraph is funnier when read while impersonating Dion’s stupid, pinchy-mouthed accent.)

Dixie Chicks, “The National Anthem” – These girls can sing. Natalie Maines has a distinctive voice, one which immediately stands out while your car radio scans for music. As she harmonized with her bandmates, their collective voices and the inventive arrangement made for one of the more interesting performances of the anthem in recent memory. Or at least it was better than that kid on the “American Idol” premiere.

END_OF_DOCUMENT_TOKEN_TO_BE_REPLACED

If Garth Brooks on a zip line with flash pots exploding below his airborne Stetson didn’t signal country music’s arrival as a mainstream music format, then the 1991 introduction of SoundScan to track Billboard chart activity certainly kicked the storm door open and left country’s muddy boot prints all over pop’s shag carpeting. Suddenly, country albums by Brooks and other superstars of the genre were found to be moving as many or more units as rock’s regular suspects. Just as the 90s suburbanizing of hip-hop transformed and further fragmented the music, country’s emergence as a format with the boot enough and scoot enough to make everyone plenty of boogy made friends in high places take notice. Now, in 2002, Toby Keith hawks phone service with Alf and Mike Piazza, and plenty of Nashville’s exports look and sound a lot like pop, if only for the occasional dobro or pedal steel moan. The Dixie Chicks are one of the most successful groups of the past 20 years in country or any genre. 1998’s Wide Open Spaces, the major-label debut of the current Chicks lineup, was the best-selling country debut of all time, moving 11 million-plus units. Together with new vocalist Natalie Maines, fiddle and banjo-playing sisters Marty Seidel and Emily Erwin saw Wide Open go on to win the Best Country Album Grammy. And like a particularly fast-moving tumbleweed, the Dixie Chicks were instant superstars.

They didn’t slow down.

Returning in 2000 with Fly, the Chicks debuted at #1 on both the Billboard 200 AND the Country Chart. The singles “Ready To Run” (Best Country Single Grammy) and “Earl” were monster hits, and Fly went on to sell a zillion records and secure the trio their second consecutive Best Country Album Grammy. Who’s still on the fence about country’s aesthetic and economic popularity?

Since Fly‘s release and subsequent tour however, country music has transformed itself yet again. And it has an ex-avant garde rocker to thank. When Jerry Harrison was tapped by the Coen Brothers to compile the soundtrack to “O Brother, Where Art Thou?” it’s safe to assume that no one was thinking about 10 million copies sold and a roots revolution in country music. But “I Am A Man of Constant Sorrow” took off with a bullet, and the record’s bluegrass and old-timey sounds were re-introduced to country and casual fans alike. “Constant Sorrow” and “O Brother” swept the major categories at the Country Music Awards, and suddenly Mutt Lange’s 1998 rockifying of wife Shania Twain and Faith Hill’s Celine-with-a-fiddle balladry was out of vogue in Nashville. Labels launched vanity imprints like Sony’s Lost Highway to capitalize on the trend towards all things roots, and an “O Brother” tour was so successful it went around the country twice.

Into this current country climate comes Home, The Dixie Chicks’ new album. There’s no question that the pairing of the blonde, cute Maines with the statuesque, whispy good looks of Seidel and Erwin contributed heavily to the Dixie Chicks popularity. But the trio has always balanced its sex appeal with considerable instrumental and vocal chops. “Ready To Run,” Fly‘s first single, included a Big Sky chorus from Maines and a great instrumental outro that featured Erwin’s rootsy banjo licks. It was a far cry from slick Nashville product like daisy duke sexpot Chely Wright or central casting retreads Trick Pony. Home‘s first single “Long Time Gone,” telling the story of a couple of Nashville ex-pats longing for the halcyon AM days of Merle and Cash, is currently ensconced at #6 on the Billboard Country Singles & Tracks chart. “Landslide,” the Chicks’ oddly charming cover of the Fleetwood Mac ballad (and a nod to their own 70’s AOR influences) is at #32. So given the Chicks’ actual, exceptional talent at singing and playing their instruments, it seems that the gold records and acetate pyramids marking Home‘s boffo sales figures will soon take their place on the mantle in Maines’ Lubbock, TX home. Because Home is a genius mixture of high-powered, can’t miss singles, bluegrass ditties just poppy enough to appeal to the broad “O Brother” crowd, and sensitive lyricism brought about by the record’s intimate, laid-back recording sessions. In another words, it’s an album that’s as mainstream as mainstream can get, that still retains enough downhome class and virtuosic instrumentation to appeal to more discerning fans. Yee hah! Shiner Bock for everyone!

Home is also the first release on The Dixie Chicks’ new Open Wide imprint, which is a subsidiary of Sony, the heartless multi-national conglomerate the Chicks just finished suing. Seems that in the midst of their high-octane power drive to country stardom, Maines, Seidel, and Erwin were hoodwinked out of over $4 million in royalties. Now ain’t that a fly in your dumplings. Anyway, the two parties settled out of court, and now the girls have their own record label, and most likely a better accountant. If that little story illustrates anything, it’s Sony Music’s intent to keep a multi-million-selling artist on its roster happy, no matter what the music sounds like. “The Dixie Chicks are three of the most talented artists in music today and the release of Home is sure to be a major entertainment event,” commented Tommy “Mariah Carey? Not as hot as you’d think” Mottola, Chairman and CEO of Sony Music Entertainment. “I know that the entire Sony Music team is excited to bring the Chicks and their music to a wider audience than ever before.” And Mottola’s people have done their job so far, with the record’s singles tearing up country radio and Home expected to make a ten-gallon debut on this week’s Billboard chart with sales of over 700,000 units. There’s no question that The Dixie Chicks will find even more fame with their new material, both inside country and without. It will be more interesting to watch what effect Home has on the “O Brother” syndrome, and whether the Chicks’ fusion of Nashville-style sex appeal and a decidedly un-Nashville approach to recording (and actually playing) their music will further engender country’s next transformation.