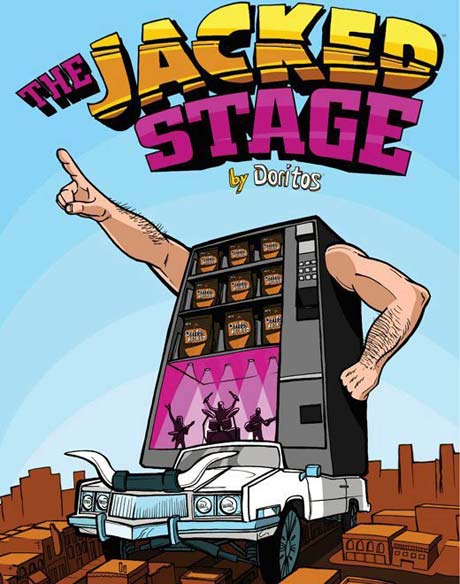 Once upon a time, certainly back in 1987, the SXSW event was about music.

Sure, there is still music in Austin today.

But SXSW has changed, as essentially every corporation that can somehow find a tie in manages to be on display.  (Arguably this is done because the people who work at said car makers or consumer electronics companies want to attend so they have cleverly convinced their bosses that it is essential to “connect” with the people who are at SXSW, so they get a full-blown ticket to ride.  Sure, they might have to do some crappy scut work along the way, but given the alternative—as in working in an office—going to Austin is a whole lot better.)

Austin may have been known for barbeque.  But Stubb’s might as well give up.

Doritos is the thing.  And it is such a thing that the brand that is under PepsiCo created a 56-foot vending machine as part of the launch of Doritos JACKED.

“Before we bring this amped up Doritos snacking experience to consumers nationwide, we wanted to take it right to our fans here at South by Southwest to try it first,” said Ram Krishnan, vp of marketing, Frito-Lay North America.

Which leads me to wonder: is eating a bag of chips—even a chip that “delivers a one-two punch of intense flavors upfront followed by a twist of spice or tanginess that packs the ultimate crunch”—an experience?  Are you experienced?  Sure, just had some Doritos.

Then who in the world is a “fan” of a snack chip?  Are there people who get together and argue about what’s better, Doritos or Cheetos, sort of like the Beatles vs. Stones?

To be fair, it should be noted that the 56-foot vending machine also serves as the “JACKED Stage by Doritos,” so it will be a concert platform as well as an object that will accept “larger-than-life Doritos-branded quarters.”

Of course it is.