A little over a year ago, we talked about the first legal lyrics repository on the internet. Turns out, these legal sites are realizing they cannot compete with unauthorized sites that actually give the user what they want: searchable, copy-and-pastable lyrics.

“We’ve had what we call modest success,” said Michael Spiegleman, senior director of Yahoo Music, the first company to adopt Gracenote‘s lyrics content more than a year ago. “It provides a fairly decent level of traffic, but it didn’t take off quite to the extent that we originally projected.”

So-called “rogue” lyrics sites — which display song lyrics without any permission from, or payment to, the publishers that hold the copyrights — still dominate the field. Because they’ve been around longer, they rank higher in Internet search results and therefore get the majority of traffic.

“The fact is, we don’t rank that highly,” said Howie Fung, senior product manager for Rhapsody.com, which licenses the LyricFind service. “There are so many illegal sites out there that it’s kind of tough to break through the rankings, so that hasn’t worked out as well as we would have liked.”

It’s not because “they’ve been around longer” that the unauthorized lyrics sites rank higher; it’s because their pages actually contain the text of the lyrics that the consumer is searching for. The authorized sites are crippled with a kind of DRM that renders them virtually useless by displaying what is in effect just a graphic image of the lyrics: not actual text. Search engines index text, and rank their results based on matching text (among other things).

The National Music Publishers’ Association is an atavistic relic of a bygone era that predates recorded music. The reality of the matter is that lyrics are just facts. And the Supreme Court has already decided that you can’t copyright facts.

Never would’ve expected Universal to be the second major label to try selling (some) DRM-free digital files. UMG honcho Doug Morris is an crotchety bald prick who loathes customers who own MP3 players: “These devices are just repositories for stolen music, and they all know it.” So it’s a bit of a shocker that he’d free up his intellectual property like this.

Then again, he’s not doing it out of the kindness of his heart. He’s doing it because the major labels are desperate and sinking fast. And he fucking hates Apple. A source “close to the situation who did not want to be identified” talked to Billboard:

“We have no illusions that DRM can knock out all piracy. It’s a speed bump. The lack of interoperability specifically inhibits the growth of the market overall. This monopoly-like position Apple has—to dictate terms, to set prices, to limit the way we sell our music—no retailer should have that power. It’s not fair and it’s not good for healthy competition.”

END_OF_DOCUMENT_TOKEN_TO_BE_REPLACED

Coming on the heels of the indie label revolt against eMusic, Touch and Go has announced the opening of its own digital shop where fans can purchase individual tracks and full albums available as DRM-free 256kbps MP3 files as well as some “CD quality 16 bit and above CD quality 24 bit WAV files” for certain titles.

The full-album download of the new Shellac album, Excellent Italian Greyhound is priced at $15.98 for all three formats.

END_OF_DOCUMENT_TOKEN_TO_BE_REPLACED

We mentioned this as a possibility back in February, but it looks like it’s actually happening now: EMI Music launches DRM-free superior sound quality downloads across its entire digital repertoire. Coming to iTunes in May for $1.29 per song: Apple Unveils Higher Quality DRM-Free Music on the iTunes Store.

• “DRM-free tracks from EMI will be offered at higher quality 256 kbps AAC encoding, resulting in audio quality indistinguishable from the original recording, for just $1.29 per song.”

• “iTunes customers will be able to easily upgrade their entire library of all previously purchased EMI content to the higher quality DRM-free versions for just 30 cents a song.”

• “Complete albums from EMI Music artists purchased on the iTunes Store will automatically be sold at the higher sound quality and DRM-free, with no change in the price.”

[T]he label said in a statement that it has been experimenting with MP3 releases from Norah Jones, Lily Allen and Relient K. “The results, so far, have been very positive and the response from fans has been enthusiastic … The lack of interoperability between devices and platforms is increasingly becoming an issue for consumers and EMI has been engaging with its various partners to find a solution.”

Could the majors finally be waking up? Do you think they’re really willing to give consumers what we want?

Steve Jobs calls on music industry to drop DRM: “”Why would the big four music companies agree to let Apple and others distribute their music without using DRM systems to protect it?” Jobs wrote. “The simplest answer is because DRMs haven’t worked, and may never work, to halt music piracy.”

Related: iPod Will Be the New CD.

The Record Industry’s Piracy Law, Circa 1900 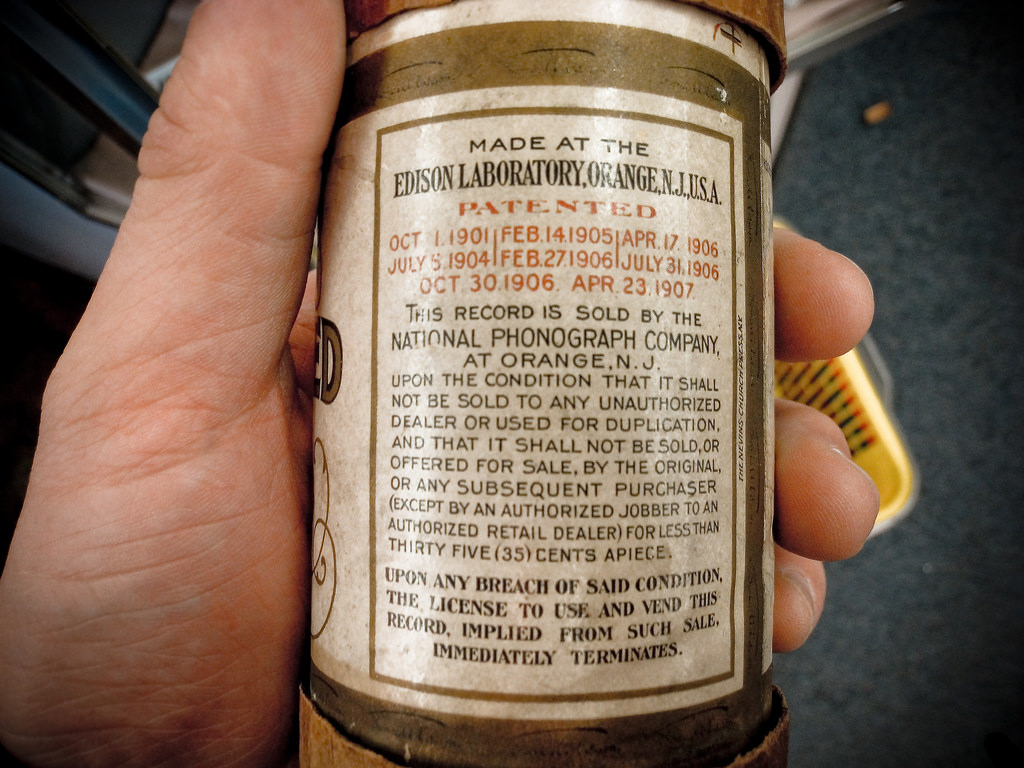 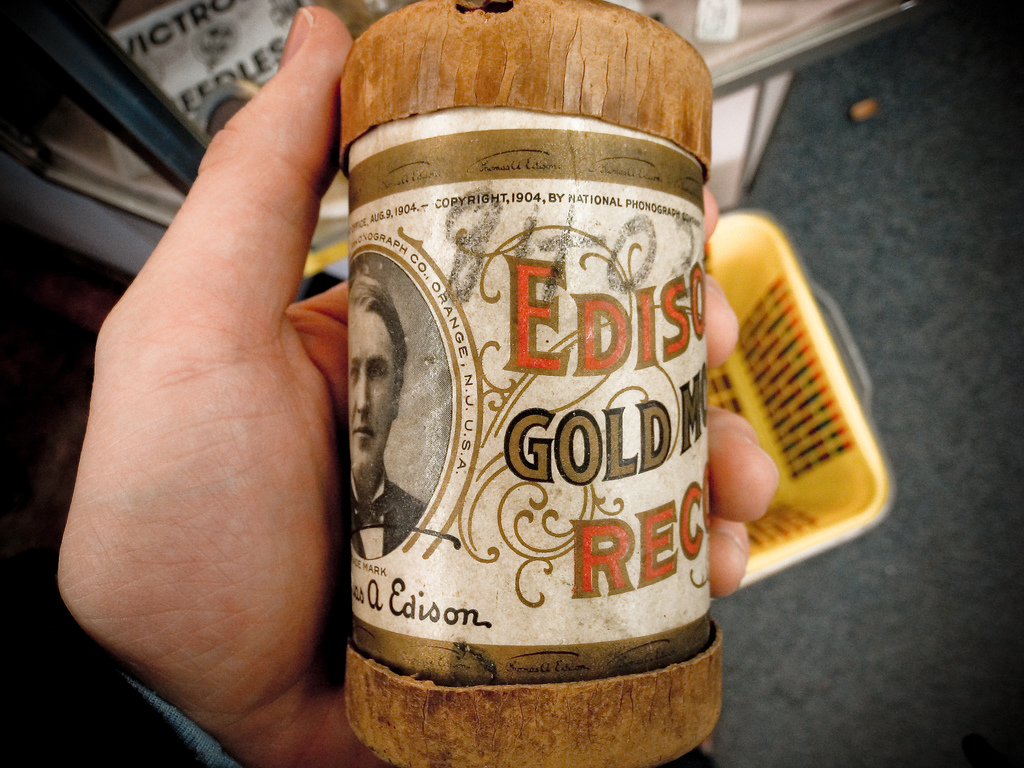 “This record is sold by the National Phonograph Company, at Orange, N.J. upon the condition that it shall not be sold to any unauthorized dealer or used for duplication, and that it shall not be sold, or offered for sale, by the original, or any subsequent purchaser (except by an authorized jobber to an authorized retail dealer) for less than thirty five (35) cents apiece. Upon any breach of said condition, the license to use and vend this record, implied from such sale, immediately terminates.”

Thomas Edison was apparently not down with the hax0rZ…

The music giant agreed Tuesday to cease embedding compact discs with digital rights management software that limited the number of copies consumers can make of the music and harmed the computers of some consumers. It also agreed to pay fines in California and Texas.

Sony BMG entered a stipulated judgment with the Los Angeles County District Attorney’s Office and the California Attorney General’s Office to remedy a civil consumer protection complaint filed by the D.A.’s Consumer Protection Division and the attorney general’s Consumer Law Section. They made a similar agreement in Texas.

Each state will receive $750,000 in civil penalties and costs.

Microsoft’s Zune won’t play protected files purchased from Napster 2.0, Rhapsody, Yahoo! Unlimited, Movielink, iTunes, or any other online media service. Except emusic, of course, who sells good, old-fashioned unprotected MP3 files. Remember kids: when you purchase files with DRM, you’re putting your trust in corporations to continue supporting that file type. It’s a bad idea. Update: Yahoo is starting to get it and is selling one album with no DRM. Previously.