A professor of music at Stanford tests his incoming students each year to determine how we become attuned to what we like:

He has them listen to a variety of recordings which use different formats from MP3 to ones of much higher quality. He described the results with some disappointment and frustration, as a music lover might, that each year the preference for music in MP3 format rises. In other words, students prefer the quality of that kind of sound over the sound of music of much higher quality. He said that they seemed to prefer “sizzle sounds” that MP3s bring to music. It is a sound they are familiar with.

So there we go. High fidelity is doomed. Have fun, kids, in your lossy, over-compressed future. I’ll be in my basement with Steve Buscemi‘s character from Ghost World. Or maybe not. 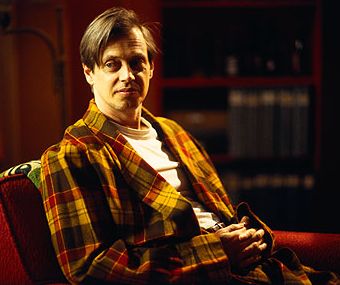 I hate my interests. You think it’s healthy to obsessively collect things? You can’t relate to other people, so you fill your life with stuff… I’m just like all these other collector losers.

Like becoming completely out of touch and irrelevant: Today on NPR on my drive to work, I heard a segment about Hot Topic, the chain of teen-focused mall stores that sell rebellious music-related clothing and other similar fashion merchandise. My initial reactions to this segment went something like this… “What the hell? I’ve never heard of that store before.” This gave way to, “Stupid kids! How can they let themselves get tricked into buying this crap by corporate AmeriKKKa and the evil record industry.” And then after listening to a kid who was shopping in the store explain why he was there (the store plays loud music and has cool stuff) and what he was looking for (a new Blink-182 T-shirt), it dawned on me: “Fuck. That could have been me when I was 17.”

I realized, right then and there that I’m old. (For the record, I turned 29 in December.) Not old in the sense of physically old, but old in that I have no idea what in the hell is going on in pop culture the way I used to, mostly because I’ve outgrown the demographic that most of it is aimed at. Is this a bad thing? Not really, but there is a corresponding effect that’s downright awful. I hate and resent the kids who are still in the loop, and pass this sickening judgment on them, of the sort that caused someone far younger than I now am to utter that ingenious phrase, “Don’t trust anyone over 30.”

Considering that I and most of the GloNo gang were the types of people who wore Smiths jean jackets in high school (alright, I wasn’t that cool, but I did wear a ridiculous jean jacket with a British flag backpatch, The Who logo, and lyrics from “The Real Me” written on the back of the collar), why can’t I “get” Hot Topic as an adult? It sounds like it’s just the cool store that I didn’t have in my crappy mall when I was a teenager. But my immediate reaction to hearing about Hot Topic for the first time isn’t to say, “Cool. Good for the kids that now they have this store” Instead, I get mad about the kids and the store. Why? Old and crotchety are the words that come to mind.

But, and this is a big “but”, is there actually some legitimacy to my outrage? Is the level to which teens are marketed to at such ridiculous levels that there’s no such thing as legitimate rebellion, as healthy teen angst? Can teens still lay waste to society through music without just being pawns in the game of the marketers? Do the marketers even matter? This is an issue we’ve touched on before on this site, but it bears bringing up again. My thoughts come down to a simple fact: I can’t even begin to think intelligently about Hot Topic and the kids who shop there because they might as well be Martians; I have lost even my slim toe-hold in the society of the young.

Thus, my new promise to myself and the kids: I’m done passing judgment on rebellion, I’m through with that “I’m more punk rock than you” ethos, I’m hereby embracing what the kids do even if it is largely a product of those hucksters at MTV.

That is, at least until I find the nerve to go hang out at the mall and figure out what’s really going on.