Some friends in the know have been trying to turn me onto The Growlers for a while. And really, why have I not been listening? I trust my friends, especially when it comes to music recommendations. Well, I finally got around to it and because I consider you, our readers, friends I implore you to not repeat my mistakes.

This is our music. It’s a bit druggy, a bit psych, a lot cool.

Listen now. Get your shit together. It’s good advice.

And then dig this awesome video: 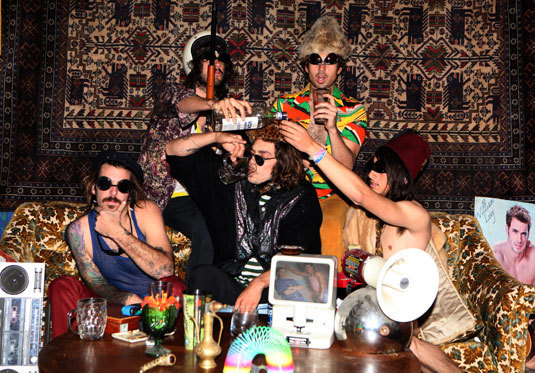 The best part of playing festivals is playing music for a large amount of strangers who haven’t yet heard of us. It’s a chance to reach more people and hopefully get their money eventually. And girl watching.

The worst part is the hype. It turns playing music into playing sports. And techno sucks and djs get respect for playing iPods.

Yes, we have all been to many festivals. Kinda obsessed with phish for a while, says Kyle. Humboldt style. Matt hasn’t missed one year at Festival of the Whales. And Scott likes Renaissance Fest for the breast.

Just got a mini guitar at thrift shop in Richmond, Virginia for $15. Score.

Evil Vince at Audio Tree is the best thing we found yet. He took us surfing and got us drunk in the morning. He likes Batman, taking photos, smokin’ weed, and long walks on the lake beach.

We played Chicago regardless of the clause. We are to small to effect the fest. Spit in the ocean.

Hello fans who couldn’t make it. Throw a house party and hit us up. If you build it we will come.

Playing Friday, August 3 at 12:45 PM on the Red Bull Soundstage