To understand why Jake and I went to Manchester, take a peek at this documentary from Granada Television that focuses on the Madchester sound.

Parts 4 through 8 after the jump…

END_OF_DOCUMENT_TOKEN_TO_BE_REPLACED 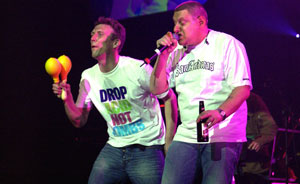 Another round of mp3s featured on Forkast recently…

• The New Pornographers – “My Rights Versus Yours” from Challengers, due August 21 on Matador [fr0k]

• Kanye West – “Young Folks” from Can’t Tell Me Nothing mixtape. Yes, it is exactly what you fear it is… [fr0k]

A couple more after the jump…

END_OF_DOCUMENT_TOKEN_TO_BE_REPLACED

The film 24 Hour Party People embodies the punk spirit it documents. But before I go into director Michael Winterbottom’s freewheeling, go-for-broke filmmaking style, I just want to say the movie’s kind of got old-fart appeal, being about the beginnings of British punk and the Manchester bands (Joy Division, New Order, Happy Mondays) who succeeded it in the 80s. The very few actual survivors of the Manchester 80s music scene who appear in the film look really, really old. I emphasize that because it seems so amazing that the punk revolution, which sneered at sacred cows from the Beatles to David Bowie, happened so long ago now. That was our revolution – the one that turned out the hippies, rejected wealth-driven spirituality and embraced a primitive brawling yelp. The movie brings back that hedonistic, artistically explosive era and plunges the viewer into its excesses, recreating the scene so successfully that it reminds you of how much plain fun it was (more than it seemed at the time, with all its confusion, drugs and attitude).