I’ve known for a while that the Beggars Group has its shit together. This might be “inside baseball” but as the publisher of an online music zine, I’ve been very impressed with how their publicity department deals with us. Each release from their four labels (Matador, 4AD, XL, and Rough Trade) is promoted with a free, easily shareable MP3, and review copies are distributed far more simply than any other label. It is no coincidence that we review more stuff from Beggars than from other labels; they make it easier for us, and we’re kinda lazy—sometimes too lazy to even send an email requesting a promo.

Now, after reading this interview with Beggars founder and chairman Martin Mills, I realize why they’re great: the dude running the show is hella smart.

“You read the industry is 60 per cent of the size it was ten years ago. But that 40 per cent that has gone is almost entirely the cream at the top. Records that sold two million now sell 500,000 – that’s where that’s gone. At the same time it’s easier to sell those slightly smaller levels.

“What’s called pejoratively ‘the new middle class’ is someone like, say, Calexico or Midlake, who can sell 100,000 plus records every time they put out a record; they can play to 3-4,000 people in 30 or 40 cities around the world. And they can make a pretty good living out of that, doing what they love doing, and can do it on their own terms, and that’s fantastic. We’ve got a bunch of bands like that, they’re not necessarily seeking stardom or riches. That’s incredibly healthy.”

You just don’t expect to read quotes like that from a music exec. It’s refreshing. Mills has lots of insightful opinions on a variety of topics, and he makes a shitload of sense. He wants his artists (and his labels) to get paid, but acknowledges that “some of our best purchasers are also pirates.” It’s a complex world we’ve got here, but this guy reminds us that it’s a great time to be a smart independent label.

END_OF_DOCUMENT_TOKEN_TO_BE_REPLACED

Do a search on “Visqueen” and you get as many results for the kick ass Seattle band that’s been hailed by NPR as “The Year’s Biggest Surprise” and the epitome of a working band out hustiling for every dollar as you do for the blue plastic tarps that cover dry-docked boats across this great nation. Described as tight, durable, inexpensive and dependable…the plastic shit is good too.

Glorious Noise caught up with boss lady Rachel Flotard to talk about the origins of the band name and the benefits of being named for an industrial product at the top of Homeland Security’s must-have list and what it takes to be a working band today. And then we catch some cartoons.

END_OF_DOCUMENT_TOKEN_TO_BE_REPLACED

Because of my cheekbones, people think I’m a crackhead. When the Roses first came out, the early reviews used to call me simian. I had to look that up at the time. Then they used to call me androgenous. Then somewhere down the line, through all the Madchester thing, it became, “He’s a crackhead.” I’ve never even tried crack, I’ve never taken heroin. I didn’t start smoking weed until I was 22.

So there you have it, straight from the monkey’s mouth. Ian Brown is a square…with crackhead cheekbones.

Paste has a good interview with Conor Oberst, Jim James, M. Ward, and Mike Mogis, who together have released an album as Monsters of Folk. Yes, it’s a stupid name, and they acknowledge that. But I like what I’ve heard so far.

Jim James: The only rule was that the four of us play everything on the record. So we played all the drums, all the bass—we didn’t hire any outside musicians. Conor Oberst: And we all sing on nearly every song, even if it’s just backup. M. Ward: That was a fun part of process—layering the vocals; finding common ground between vocals. Mike Mogis: That’s one of the standout features of the record. The songwriting is great, as well, but the sheer sonics of hearing these three people sing together… Oberst: It’s that old folk sound. [laughter] James: It’s just like Peter, Paul and what’s his face. [laughter]

Sounds like they’ve got the right attitude—not taking themselves too seriously. We’ve got a couple of videos after the jump, including a live version of “Say Please” plus a song that sounds a lot like American Beauty-era Grateful Dead.

END_OF_DOCUMENT_TOKEN_TO_BE_REPLACED

If you’re into music, you’re into religion, somehow or another. Religion, that’s the bloodline of music. The whole reason, I’m pretty sure, we have music on notation is to preserve chant– to transcribe what was going on, which we’re singing in order to describe the experience the divine. So there is that connection, which is part of the big appeal, to me, of churches– that there’s always something musical going on in there. That is making what to me is a pretty obvious connection between whatever we want to call divine and music, which seems permanently and inextricably bound.

As we noted back in July, all of the songs on The Life of the World to Come are named after Bible verses. As a handy guide, after the jump we provide the text of the verses …

END_OF_DOCUMENT_TOKEN_TO_BE_REPLACED 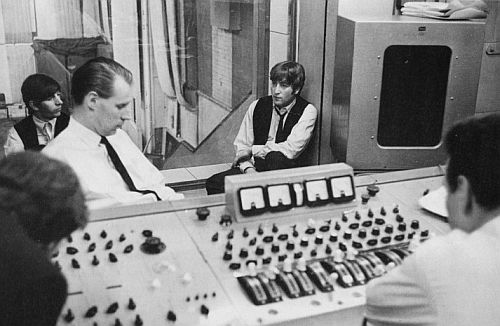 Recently found this 1987 interview with George Martin by Allan Kozinn, wherein the Beatles producer tackles the mono vs. stereo debate and explains why he remixed Help! and Rubber Soul for CD.

GEORGE MARTIN: Yes, we were still doing different things then, but I was still working towards the compatibility, and in fact my attempts on “Rubber Soul” were to find a decent mono result from a stereo record. As you know, if you put something in the center, it comes up four dB louder in mono than it does in stereo. But if you tend to balance your things between one side and the other….And also, I was aware in those days that the majority of record players in the home were built into kind of sideboards, where the speakers were about three feet apart, and the stereo picture was a very near mono one anyway. So I exaggerated the stereo to get a clearer effect. These were experiments. It wasn’t a question of rushing, I really was trying all sorts of things.

The whole thing is fascinating, and it’s crazy to see how cavalier Martin is regarding the historical importance of the original mixes, and how utterly uninterested he is in the mono mixes of the later (65-68) albums.

Via SH Forums, and here is the New York Times article for which this interview was conducted. 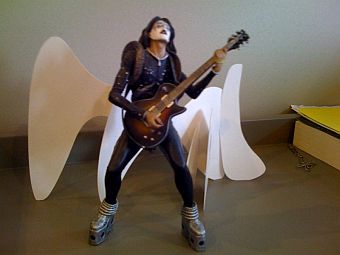 Kiss was my favorite band when I was eight years old. My cousin Mike and I would act out all the songs and recreate our favorite scenes from Kiss Meets the Phantom of the Park. The above photo is my Ace Frehley action figure on my desk. Mike and I saw them back in 1998 and it was a culmination of my whole childhood. Objectively, the show probably sucked, but to me, it was awesome.

Magnet Magazine did a Q&A With Ace Frehley to talk about his new solo album, but this is my favorite part:

You have to sit through one of these in its entirety or you will be killed: Kiss Meets The Phantom or (Music From) The Elder. Which one do you pick, and why?

I just saw the Phantom movie for the first time in years a few weeks ago. I can’t speak for the other guys in the band, but I think it’s a campy, cult classic. I think it’s great. I just visited Magic Mountain this year, and a lot of memories about filming that movie came flooding back to me. The new coaster rides are awesome.

Ace is awesome. But he can’t sing. That’s one of the things I remember about the show I saw: my cousin Mike turning to me during Ace’s single turn at the mic and shaking his head and yelling, “Ace can’t sing!” Of course, that doesn’t make him any less awesome.

END_OF_DOCUMENT_TOKEN_TO_BE_REPLACED

“I always think of the song [“Wilco (the song)”] as meaning not just Wilco,” Tweedy tells me at the band’s rehearsal space, the Loft. “I always think that song is saying, ‘Your records will love you, baby.’ The overall message is to find consolation through music. I think it’s sincere, but at the same time, it’s meant to be a little bit funny.”

The online version contains a little video of Tweedy riffing with his kids. Cute.