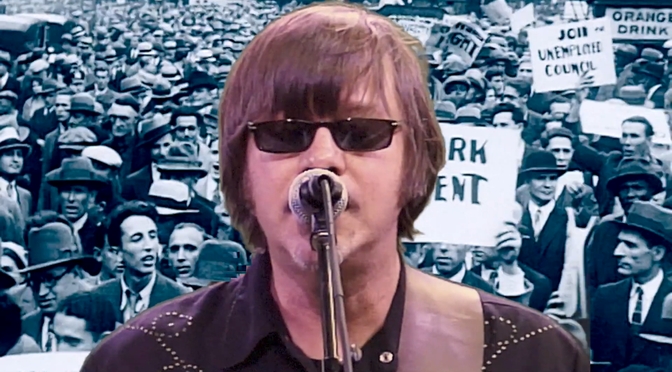 From Union, out now.

I don’t spend a lot of time on negativity anymore, and that includes writing negative reviews. I mean, really…we’re surrounded by a shitstorm of Trumpist negativity and we are a music site of, by and  for fans. So it pains me to write this:

This new Son Volt video is laughably bad. Jay and crew playing in front of a green screen while stock footage of the Great Depression is the No Depression version of phoning it in. And seriously, we can’t have that. This is a crucial time in the history of this country and we need Jay’s voice. It’s important. No half-measures, man. I am onboard with the sentiment, but you must try harder! 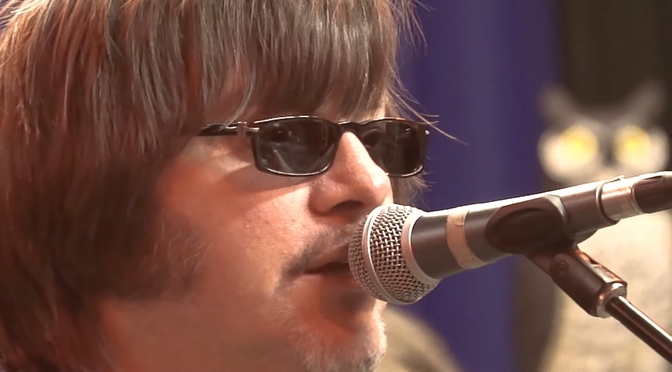 How great is Jay Farrar? He’s been writing consistently good songs for thirty years now. It’s pretty crazy if you think about how long and how consistent his career has been. Even heroes like Neil Young went through a dicey phase 20 or 30 years into their careers; Jay Farrar has rarely slipped up.

And now he’s written a song about the nuts and bolts of making music and how it helps to keep you focused when the world around you is crazy.

Farrar told Billboard that he wanted a song for the thematically political album “to embody a more regular rock ethos… I was thinking about bands like the Replacements, who would fall off the stage in the first chords of their songs, the Stones, the Who.” Lyrically, the song channels “the flowery language put on a lot of music equipment packaging–’stellar magnetic winding’ from string packages or something, that kind of Guitar Center reality.”

END_OF_DOCUMENT_TOKEN_TO_BE_REPLACED

The Austin Chronicle reports that Jay Farrar is working on the next volume of unpublished lyrics from the Woody Guthrie Archives. Farrar, along with Jim James (My Morning Jacket), Anders Parker (Varnaline), and Will Johnson (Centro-matic), recorded the album in New York in March, and it “is currently in the mixing stage.”

“Jay sent me a priority mail package full of the lyrics, and I opened it at 4:30 in the afternoon,” Johnson recalls. “Within 17 minutes, I had already documented this one called ‘Chorine My Sheba Queen’ to the recording machine. That speaks far more about the song than anything I did. The lyrics struck me in a way that the music sounded automatic. It made such sense to my soul and my spirit. It’s got an empty and regretful tone but in a very beautiful way. I just latched onto it.”

The Guardian claims that this is “the third Mermaid Avenue collection,” but that’s not accurate. It would be at least the sixth seeing how the Klezmatics have released two albums in the series (Happy Joyous Hanukkah and Wonder Wheel), and Jonatha Brooke recently released another (The Works). Fact checking is hard!

Regardless, it still feels odd that Farrar would invite the inevitable accusations of following in the footsteps of his former bass player in Uncle Tupelo. Then again, I never would’ve thought he’d record with the guy from Death Cab either…

MP3: Jonatha Brooke – “All You Gotta Do Is Touch Me” (lyrics by Woody Guthrie)

END_OF_DOCUMENT_TOKEN_TO_BE_REPLACED 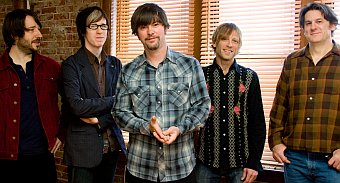 MP3: Son Volt – “Down To The Wire “ from American Central Dust, due July 7 on Rounder.

No, it’s not the Buffalo Springfield outtake, although I can totally hear Jay Farrar singing that. Did Uncle Tupelo used to cover that? This one is an original that sounds like it would’ve fit nicely on 2007’s underappreciated The Search. It features tremelo guitars and swinging drums, and actually sounds kinda fun. And check out that smiley promo picture: could Son Volt have become…happy? (Probably not.)

Down To The Wire

END_OF_DOCUMENT_TOKEN_TO_BE_REPLACED

Son Volt – Okemah and the Melody of Riot (Sony Legacy)

They say you can never go home again. Try though he might, Jay Farrar has found out for himself. You might be able to go back to the old house only to find another family living there.

After abandoning the name in 1998 to pursue a “solo” career, Farrar finds himself coming home to the Son Volt moniker, a name he took on after he left Uncle Tupelo. What the difference is between his solo material and that which falls under the Son Volt umbrella seems to rest solely on whether weird keyboard sounds and loops are employed or straighter, country-tinged guitar rock is in tow.

Okemah and the Melody of Riot does bring Farrar back to a base with which he’s familiar and one Tupelo fans will surely welcome. There are loads of big guitar hooks, populist lyrics, tight instrumentation and that voice. References to Woody Guthrie and Revolutions will put those old time fans at ease and remind them of the long lost Whiskey Bottles, Postcards, and Anodynes that have lately taken a backseat to blips and static.

While the name remains the same, be sure that this is not entirely the Son Volt you remember. The Boquists are gone. So is Farrar’s companion from the Tupelo days, drummer Mike Heidorn. The only remaining member of the original line-up is Farrar himself. The chemistry is different. The production is different. There some pop influences there, particularly in Dave Bryson’s drumming. So, in essence, this isn’t Son Volt at all. The same could be said of the constantly fluid line-up of Wilco, but where Tweedy has stuck to the name and established that project as a “band” by way of relinquishing artistic control (if only briefly—ask Jay Bennett) and engaging in true collaboration, with an albeit revolving cast of players, Farrar is Son Volt.

But that’s not a negative, nor is it a reason to mock Farrar for resurrecting the name when his solo records failed to get the attention of his earlier Son Volt catalog. Okemah is a good album that works from Farrar’s strengths. It’s delivered with his flawed honesty and a commitment that has left a trail of broken musical relationships (not unlike that other guy). This may indeed be his best album since the genre defining Trace. But it’s hard to not at least acknowledge the fact that Farrar’s career would have probably been better served if he’d never dropped the name in the first place. If he hadn’t, this review would be about two-thirds shorter.