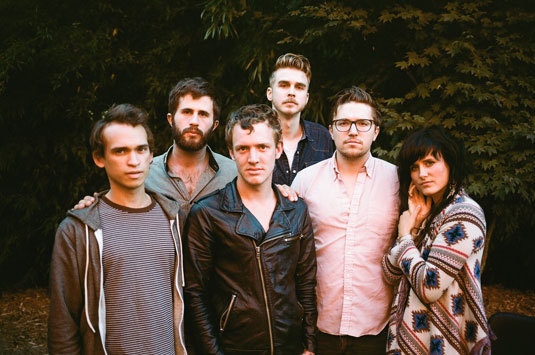 The best part of playing festivals is getting to explore the other stages and stumble upon new music that we haven’t heard of. As strange as it sounds, we don’t get to see very much new music when we’re touring, so festivals are the best way to see something new and refreshing that will inspire us.

We are usually pretty busy at festivals with sound checks, taking care of our gear and interviews. As a result, it’s pretty difficult to know that we’re missing out on some amazing music.

I went to Bonnaroo this year and a few years ago as a fan. The experience is totally different. When you go as a fan, you have to fight for shade, places to relax and getting close to watch shows. I have a lot of respect for festival goers because it’s such a commitment.

At The Drive In, Justice, Frank Ocean, Die Antwoord, Franz Ferdinand, and our pals in GIVERS

It depends on what the band members ate that day.

The other day I bought a used box set of Motown singles that has been treating me very well.

Chicago has amazing, interesting people and fantastic food. Last time we were in Chicago we had a day off and went to see our friends in Family of the Year play at Lincoln Hall. We had some time to kill before the show, so we stopped by a bar down the street called Rose’s Bar. A Macedonian lady well into her 70s (who we later discovered was the owner, Rose) welcomed us and treated us as if we were her own grandchildren. What we expected to be a quick stop for one drink turned into about three hours of getting to know Rose and her son. Every few minutes, Rose would call out to us, “I love you” with complete sincerity. Needless to say, we will be visiting Rose before our Lollapalooza after party show at Lincoln Hall.

The clause hasn’t affected us, but I can definitely see how that would be frustrating, more so for the local concert goers.

We have shows coming up in Green Bay and Madison, Wisconsin. We plan on hitting the road hard, so keep an eye out if we don’t already have a show in your area.

10. Finish this sentence: Perry Farrell is..

Playing Saturday, August 4 at 12:00 PM on the Google Play stage