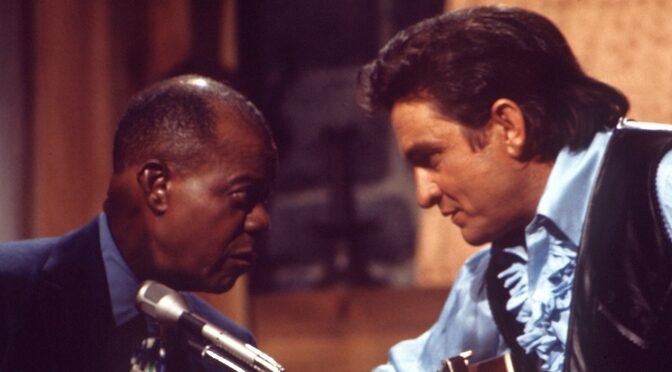 END_OF_DOCUMENT_TOKEN_TO_BE_REPLACED

I read about this 1970 clip in the most recent music issue of the Oxford American in a great article by Charles Wolfe called Country Music in Black and White:

Then Cash himself, cracking a rare grin, moved in and sat and talked with him about Jimmie Rodgers, one of Cash’s heroes. Yes, Satchmo remembered backing him on “Blue Yodel No. 9,” and yes, it would be fun to try to recreate it. So with Cash playing Rodgers and Armstrong playing—well, himself—the pair brought the audience back to 1930. Cash and Armstrong swapped choruses on the old blues standard—Cash doing a swaggering vocal, Armstrong playing a dynamic, elegant series of trumpet breaks, in spite of the fact that his doctors in New York had told him to stop playing for good.

In a sense, this was one of those unique cultural cusps that seems to occur only in American music—the kind that gave rise to Western swing, rock & roll, and rhythm & blues, one of the better nights at the Ryman, a place, Lord knows, that has seen its share.

I finally got around to searching for it, and of course it’s up on YouTube (thanks to user opurkert). Check out this amazing historical artifact after the jump…