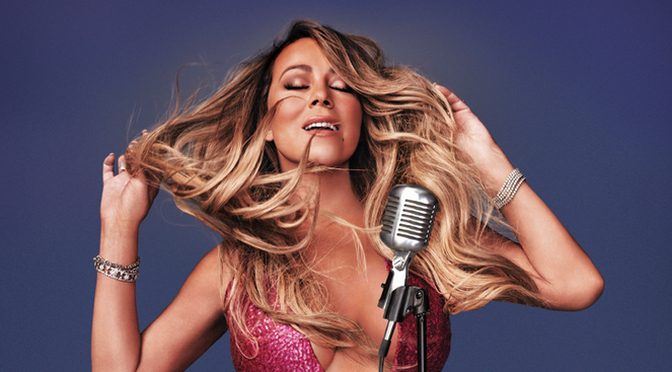 If you fly frequently you undoubtedly accumulate “miles” as part of a loyalty program. Given a sufficient cubic ton of these “miles” you’re able to book even more air travel, although you probably find that it is exceedingly difficult to schedule anything that goes anywhere you want to at the time that you want to go.

Airlines have cleverly come up with ways for people to use their miles for non-flying purposes, everything from magazine subscriptions to memberships in the airlines’ lounges.

Delta, the Macaulay air travel vendor of choice, has taken this use of miles to a whole new level with its “SkyMiles Experiences.”

This allows you to use miles to “bid” on various things, ranging from attending a NASCAR race to having dinner at Thomas Keller’s Per Se restaurant. While you probably would have zero problem getting tickets to the Quaker State 400, reservations at Per Se would be something else entirely.

At this point you may be wondering whether this is the GloNo Travel Tips section that you’ve accidentally stumbled upon.

END_OF_DOCUMENT_TOKEN_TO_BE_REPLACED 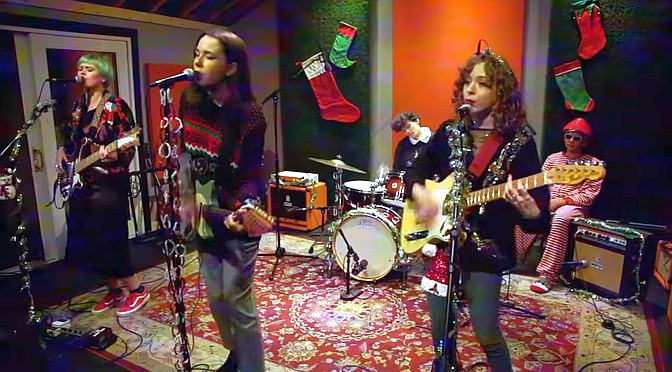 The Regrettes - All I Want For Christmas [Live Video]

END_OF_DOCUMENT_TOKEN_TO_BE_REPLACED

They’re losing their labels. (Comparatively) young and old, alike. Mariah Carey doesn’t sell as many as they’d hoped. Gone. Bought out for more millions than she’s likely to be able to spend on minidresses, Manolo Blahnik shoes, and spas to keep her in shape to wear them. Rod Stewart is dismissed. The answer to the question he’d ask about whether he’s sexy is now answered in the negative. It has been for some time. But hope springs almost-eternal in the dark hearts of label execs (“Maybe there’s another ‘Maggie May’ in him. . . .). And there are other performers. Plenty of them.

Some would say, “Good riddance.” Others will be happy enough with their existing recordings. And there will be new acts.

But this situation points to something that should be of at least moderate concern to many people, people who might imagine that the punking of Carey and Stewart and Bowie and. . . is nothing to fret about.

One of the arguments that’s made when there is the consolidation of two businesses is that there will be greater scale and efficiency. The scale is straightforward: 1 + 1= 2. The efficiency is more disingenuous. What this says is that if there are 5 people in one company and 5 people in the other, the post-merger result won’t be 10, but probably 6. The other 4 will be considered redundant.

But there is an odd characteristic of the Consolidated Beast. It is hungrier than the two smaller entities. Hungrier for revenues. Perhaps this is because one of the two bought the other. And this is often more like a shotgun wedding than a love-driven elopement. The union costs far more than what’s available in the bank. So profit margins matter. Big time.

The question that’s asked of artists today is “What have you done for me lately?” And the answer had better be good. Damn good. Ridiculously good. And “lately” means “right now.”

This is not a sob for Mariah and Rod and the rest. Rather, it is about others, countless others. The consolidated music industry means one thing: Hunger for hits. Insatiable hunger. The stomach is always growling.

Sure, there are independent labels. Plenty of them. And to be a musician is not necessarily to be a millionaire. It is more likely not to be one.

But the sad part about the current state of affairs is the difficulty to reach other ears with music. Fresh ears. It is difficult for people to find new bands (or bands new to them). These independent labels have limited reach (the Internet notwithstanding).

The issue is distribution. And the big-box retailers are stocked by the few, not the many. And the independent outlets dwindle (rent, utilities, help, inventory, etc. are all ever-pricey), and even those that exist tend to be able to do no more than to handle more, but not lots. And this tends to be regional music, not something that is going to get play from coast-to-coast. It is a Balkanization of the industry. And the big acts will be those that have been manufactured by the corporations, manufactured with all of the passion they apply to chunking out Wonder Bread.

“No more Terry Bradshaw!” they scream.

Each year, the concentric rings of florescent gluttony emanating from the Super Bowl reach further and further out, before they eventually dissolve, say, around the time pitchers and catchers report to Spring Training in late February. But this year, on top of the reams of ad money and endless sports media backslapping that have become traditions, Fox’s coverage of the Super Bowl was spun as an “America RULES!’ boondoggle on par with James Brown’s “Livin’ In America” spectacle preceding Apollo Creed’s bout with Ivan Drago.

And I still don’t know what an Mlife is.

The event played out on a series of levels. In the center was the game itself, which was treated as a non-event til midway through the second quarter, when it became clear that the AFC’s New England Patriots were not the Washington Generals to the NFC’s St Louis Rams’ Globetrotting “Greatest Show on Turf” act. Revolving around the game was the usual Sunday slumber – which on Fox is dominated by JB, Terry, Cris and Howie’s towel-slapping antics and barely tenable game analysis. But because of September 11, and in anticipation of the patriotic daisycutter that will detonate over Salt Lake City next week, Super Bowl XXXVI was almost forgotten amidst the Up With America! fervor lancing through every aspect of the event.

 Mariah Carey sobered up long enough to competently lip-synch our national anthem. A full-figured gal, Carey’s pinup girl good looks nicely complimented Fox’s troops-in-Kandahar breakins. Here’s what you’re fighting for, boys. Get home safe, you hear? And when you do, visit Mariah at the group home, where she’s gearing up for a tour of America’s roadhouses and supper clubs, selling her new release from the trunk of her 1986 Nissan Sentra. Vanity license plate: CRAZY4U.

 “Sir” Paul McCartney, looking spry in his casual tracksuit, performed “Freedom,” his wretched song penned in the wake of 9/11. The sentiment is to be applauded. But like Neil Young’s “Let’s Roll” before it, the song just sucks. A better Macca moment came during halftime, when he harmonized with Terry Bradshaw in a version of “Hard Day’s Night” straight out of the decaying brain matter knocking around inside Bradshaw’s skull. The erstwhile Steeler QB played too many games without his helmet on, and it shows. For his part, McCartney took it all in with good-natured charm, not even flinching when the decidedly un-funky James Brown suggested that McCartney’s old band changed the world “with their moptop haircuts.”

 U2 made the most of their 12- minute halftime gig, even if the heart-shaped stage and “Beautiful Day” don’t have the same freshness they did over a year ago when we first saw and heard them. Bono’s entrance through the crowd was a nice touch, as was the brief coda of “MLK” before the Edge’s sparkling intro to “Streets Have No Name.” Instead of his usual sermon on peace and love, Bono chose to let an enormous projection of 9/11’s victims speak for itself.

It’s been suggested that an American band should have performed at halftime. Who, Grand Funk Railroad? U2 is no longer just an Irish band. While Bono’s proselytizing is at times overwrought, he and his band have truly become a band for the world. Their message is clear, but their music supports it with appropriate amounts of rocking and songcraft. They were the perfect choice for this year’s halftime show, reinforcing the patriotic flair of the show with their trademark grace and sound.

By the end of the fourth quarter, a slush fund of ad dollars had amounted to a memorable Broadway chimp, a few funny Budweiser ads (“I’m doin’ fine. My brother just picked me up from the airport and…”), and the fact that Britney would have been hotter in the 1950s. Because of the Patriots’ late game heroics, Fox had to push its tribute to departing broadcast icon Pat Summerall into the post-game. But when it finally came, the video montage was accompanied by some extremely awkward on-camera banter between the ancient Summerall and his booth partner for 21 years, the monolithic John Madden. It only got worse when each member of Fox’ broadcast crew delivered a soliloquy about what Summerall meant to them (or at least what he meant to their fledgling careers as moronic broadcasters). It may have been time for the 71-year old Summerall to hang it up, but Fox’ treatment of his farewell was concurrent with the network’s bludgeoning, substance-less brand projection. Even drunk, senile, and old, Pat Summerall has more class than goose-necked desk warbler Cris Collinsworth.

Given the Fox network’s penchant for brazen cross-promotion, Super Bowl XXXVI’s patriotic bent could have been so heavy-handed as to make the terrorists hate us more. The cast of “That 80s Show” reciting the Gettysburg Address in Valley Girl accents, perhaps? Instead, the event combined reverent patriotism, exciting football, and a hint of that “don’t fuck with us” cold war chest-thumping that defined Rocky IV and America in the 1980s.

And in the end, a red, white, and blue team of upstarts and never weres, led by a spunky kid QB with corn-fed good looks and an “aw, shucks” smile, knocked the cool kids’ block off, and made the Vince Lombardi trophy their own. If that doesn’t sound like a script written for America in 2002, I’ll submit to a Quizno’s product testing seminar.

The fine folks over at Whatever-Dude have posted an insightful critique of Mariah Carey’s career, boobs and personality titled, Mariah’s Theme: An Unholy Shriek of Death. Check it out.