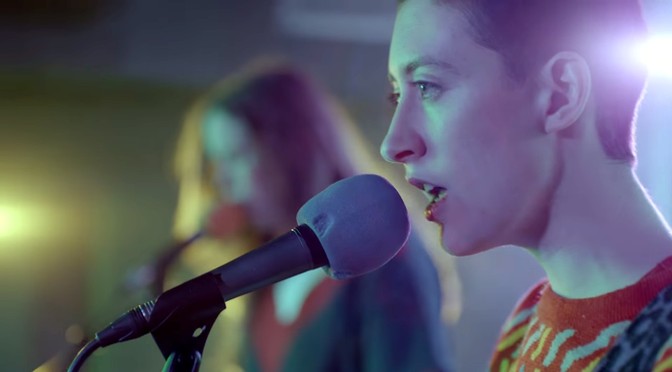 Directed by Tom Scharpling. From Vessel, out now on Sub Pop.

This video is funny. Greta Kline says, “I am a huge fan of Tom Scharpling’s work and was so thrilled that we got to work together on this video. I trusted him entirely and just wanted to let Tom and his team do their thing. We had so much fun making it… I was laughing so much that it probably took much longer than it should have to shoot my parts.”

Picking a unique band name is hard. Back in 2004, shortly after we released the second album on our label, Riviera’s At the End of the American Century, a different band calling themselves Riviera popped up out of Germany and started trying to sabotage our Riviera’s last.fm profile. The whole thing seems ridiculous in retrospect, especially since at least two more bands named Riviera have formed after that and continue to battle for dominance. The best part is that the most recent Riviera kind of looks like the “other band” in the Frankie Cosmos video. Dorks. Our Riviera, sadly, is now defunct and they even let their domain name expire, which breaks my heart. But hey, it was a good run. 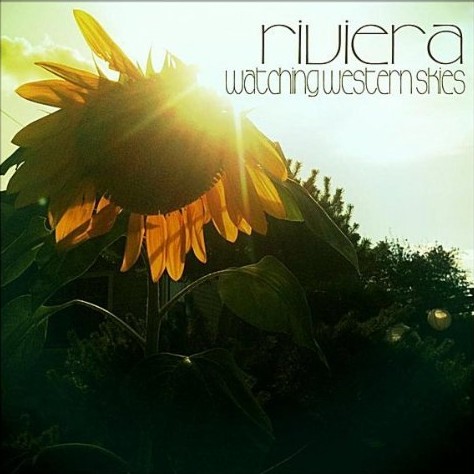 You might remember a band called Riviera. Back in the day when we were flush with ad revenue, we started a little record label to release music by bands we loved. One of those bands was Riviera. It doesn’t hurt when the founder of the band is one of the founders of the record label (just ask Superchunk). Anyway, Glorious Noise Records ran out of money and went on hiatus, and Riviera relocated to Portland.

The label’s still on hold but Riviera is back in action with a new EP called Watching Western Skies, and for a limited time you can download it for free over at captainsdead. So check it out! Why not?

Of course, if you dig it and want to support the band, you can always toss them a fiver and get a genuine physical compact disc! This band doesn’t really tour outside the Pacific Northwest so if you wanna encourage them, don’t wait for them to come to your town because they probably won’t.

So, yeah…Riviera is back…sorta. As most loyal readers know, Mick and I moved to Portland a while back. Well, this city is just too great to NOT play here. And since we have a ton of stuff to sell still we figured it made sense to resurrect the Riviera name.

You can get all the nitty gritty details on the band’s website or at ReverbNation, but the gist is that we found some great, great players here in Portland and will be playing some shows starting December 4.

In the meantime, enjoy this clip of me and pal Hamilton Sims of Little Beirut covering New Order’s “Love Vigilantes” shot in the GLONO West HQ, La Finca.

We miss the Chicago crew something fierce and could never replace those boys even if we wanted to. But the music calls! Be sure to check out Josh B’s new joint too.

END_OF_DOCUMENT_TOKEN_TO_BE_REPLACED

Surprise! We were told that the episode featuring Riviera songs was to air next week. As it turns out, it aired last night, July 21.

Luckily for you rabid Riviera fans, A&E posts video clips of the show on their website. If you skip to clip #5 you can see the final two scenes of the show that use the songs “Golden Lies” and “Friends in California.”

Two years after our last show, Riviera is back…on TV. GLONO’s own will have two songs featured in the July 28 July 21 episode of the A&E network’s show The Cleaner, starring Benjamin Bratt. Both “Friends in California” and “Golden Lies” will feature prominently in the show. Set your TiVo and recall the glory days of Chicago’s most punctual band!

Be friends with Riviera!

END_OF_DOCUMENT_TOKEN_TO_BE_REPLACED

You don’t hear it in this trailer, but our own Riviera has some songs on the soundtrack of RIFFRAFF, a new coming-of-age comedy about lifeguards on Chicago’s North Avenue Beach, starring Robert Belushi. RIFFRAFF has its Chicago premiere on May 29 at the Gene Siskel Film Center and will be running through June 4.

Riviera songs used in the film include “Left Behind” from the self-released Broken Hearted Dreams EP, as well as “Golden Lies” and “Making Friends” from Capital, available now on Glorious Noise Records.

END_OF_DOCUMENT_TOKEN_TO_BE_REPLACED

We are very proud to announce that today is the release date for the third CD to come out on Glorious Noise Records. Capital is Riviera’s second full-length album, and we’re super excited about it.

You can order it online today at Miles of Music, CD Baby, Amazon, iTunes, Rhapsody, and many other online distributors.

Better yet, get it from your local independent record store. Let them know they can order it from Carrot Top Distribution (they’ll know what that means).

Before you buy it, you can listen to the whole thing online for free. The band gives away lots of mp3s on their site, too. So check them out, and if you like what you hear, pick yourself up a copy.