The Sinatras perform “She Said She Said” and “I’m Neil Young” at Access Vision Studios. April of 1992, Battle Creek, Michigan.

This was the era when the Sinatras first blew my mind. You can see from this video exactly why Twin/Tone expressed an interest in them; they would’ve fit in perfectly there. They were so great, and they deserve far more recognition than they’ve ever received. If you’re not familiar with these guys you can read our big, long feature from 2006: The Sinatras: Kinda Like Love. And you should definitely check out their album, Life in Flames, finally released in 2009 after being tinkered with for more than a decade.

END_OF_DOCUMENT_TOKEN_TO_BE_REPLACED

Over on the Rhapsody Editorial Music Blog, Justin Farrar coins a phrase to describe a particular strain of 80s punk: Blister Pop, a style that “fell in the cracks between post-punk, hardcore, power pop and Attractions-style pub rock.” This style thrived in the American Midwest, where punks still listened to Cheap Trick and the Who.

In the Midwest — pre-Internet, that is — there was no sealing yourself off from mainstream culture. There was no Lower East Side-type hipster bubble to hide inside, and so alterna-types in the middle of the country tended to mix everything together into one big stew. This is how you get Husker Du, a group that found a way to fuse insanely thrashy hardcore and 1960s-inspired pop.

The embedded playlist kicks off with our beloved Sinatras, which is what got our attention, and includes other “Blister Pop” songs by groups from all over the States including the Mice, Mission of Burma, Husker Du, the Embarrassment (whose album gave the genre its name), the Feelies, and lots more. Check it out. And if you can think of better name for this than “Blister Pop” share it in the comments.

END_OF_DOCUMENT_TOKEN_TO_BE_REPLACED

What would posses a writer to dedicate over 4,000 words and weeks of time to cover a band nobody has heard of outside of a small Michigan town? You must be new to this site.

It was the fall of 1989 or 1990, I don’t recall anymore. It was a long time ago. I do remember exactly how it felt though to be visiting friends at various colleges and getting those first tastes of freedom that power so many of the memories of that time. To be wandering around with people your own age with so few restriction or boundaries. To be treated (somewhat) like an adult when you’re really still just a kid and excited by the simplest of things like hanging out in the quad talking at three o’clock in the morning and nobody—NOBODY—is telling you it’s time to come in. Staying up for two days playing video games or watching foreign films you don’t quite understand but are intrigued by just the same. Meeting people from around the world and discovering new ideas, accents, films, books and music. For me, those growing years where I transformed from a dopey half-rate wrestling team pseudo jock to a pretentious and undereducated, but infinitely more open and curious person…that transformation happened in Kalamazoo, Michigan.

Kalamazoo is where I formed the inklings of my forever developing political beliefs and ideas of social justice. It’s where I met the smartest people I’m likely to ever know. It’s where I later met my wife. And the entire time had a soundtrack that was filled with songs from bands nobody outside of that city and that time know anything about. The band that best captures that time and transports me to that person is the Sinatras. Back on that fall night, Jake and I were on our way to see a group of college bands play in the basement of Kalamazoo College’s student center. Pushing through the sweaty mass of students packed into a cinderblock room I can still see the faces of my best friends, smooth in youth and ecstatic with drink and rock and roll.

All I knew about the bands that night was that one had been around “forever” and would play ridiculous covers of TV theme songs, including a funky “Sesame Street” and “Movin’ On Up” from the Jeffersons. Drunk on Bacardi and Coke and praying I’d meet some hot coeds, I was transfixed by the sight of a giant and a mop-top fronting a pie faced mass of drumsticks and fury.

Ron Casebeer is six foot six with the sweetest voice you’ve ever heard and a playing style that fluctuates between Pete Townshend and Neil Young and can shift from finger picking to power chords in a fraction of a beat. Karl Knack is much shorter (who isn’t?) and topped with a shock of hair that covers his eyes and a curious feel for the bass that pushes melodies while never giving up sonic ground. Scott Stevens to this day looks like he’s 15 years old with a grin never far from his lips and drum fills that confound your mind. This is the Sinatras. 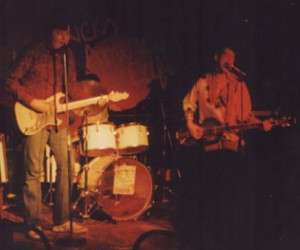 END_OF_DOCUMENT_TOKEN_TO_BE_REPLACED

The Sinatras have been legends of the Kalamazoo music scene for a dozen years or more. They are all grown ups now, and they don’t play out that much, so getting to see them live is a rare treat. It also tends to be a hit-or-miss affair, since they apparently don’t get together very often to rehearse between shows.

The previous time I saw them, which was about a year ago, was a real disappointment. The Atomic Numbers opened up for them and totally rocked out with their unlikely mix of the Stooges and Badfinger. The Sinatras were impressed and kept egging them on to do encores. By the time the Sinatras finally took the stage, they played like they didn’t really give a fuck. It was a bummer.

But a couple weeks ago I got a chance to see them again, and this time they didn’t let me down. Not at all. In fact, they blew me away harder than any band I’ve seen a hundred times should be able to do.

There was a moment during an instrumental freak out at the end of their cover of “She Said, She Said” when I felt like I was in the presence of God, the very definition of my concept of “glorious noise.” It amazes me that three guys can make this much sound.

A lot of it comes down to Scott Stevens’ drumming. Watching him play is as close as any of us will ever come to seeing Keith Moon in his hey day. They set a cinder block in front of the bass drum so he doesn’t beat himself off the stage. And even with the heavy chunk of cement, by the end of their set he had inched his kit forward about a foot.

Ron Casebeer and Karl Knack both write great songs, and they must have a couple hundred of them in their repetoire, so it’s crazy how bad we all want them to play “The Kids Are Alright.” There’s just something about watching them do this song that transcends the typical bar band covering a popular song — something magic about the sped up tempo or the slight vocal changes, I don’t know. You can’t put your finger on it, and I probably shouldn’t try.

For me, the Sinatras bring me back to time when I believed I was going to be something that I don’t really believe in anymore. I don’t even really know what it was that I thought I wanted to become, but something happens when I’m standing in that crowd with my eyes closed, nodding my head to the cymbals, and listening to that band. It mellows my mind to the point where I feel peaceful and excited and nostalgic and optimistic all at once. And how often does that happen these days?

They apparently have an album’s worth of material already recorded and almost ready to go. I’ve been hearing that for a few years now, and I’m not very confident that I’ll ever hold it in my hands, but I’m really hoping everybody will get their shit together and do what it takes to get this thing out soon. The handful of singles and compilation appearances and live bootlegs just aren’t cutting it for me anymore. I need more. Give it up.