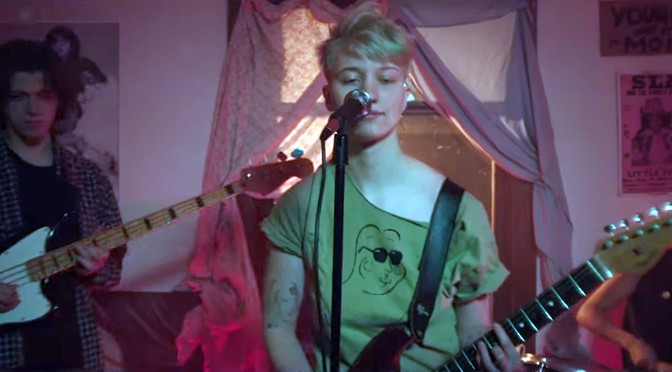 END_OF_DOCUMENT_TOKEN_TO_BE_REPLACED

Anybody catch Julian Casablancas on the Conan the other night? It wasn’t as “far out” as I expected it to be from reading a couple interviews with him. Sounds like the Strokes with some bloopy bits and programmed drums. Not bad, but not super interesting either. I turned it off and went to sleep before the song was over, but now we can watch all the way through via Hulu.

So I haven’t heard the album all the way through, but I like the song he’s giving away on his website. What do you think? Is this just changing the saddle on a one-trick pony, or is he creating something fresh here?

MP3: Julian Casablancas – “River of Brakelights” from Phrazes for the Young, out November 3 on RCA.

END_OF_DOCUMENT_TOKEN_TO_BE_REPLACED

Video: Dark Night Of The Soul

Despite the fact that you can stream the album in its entirety right now at NPR, it looks like Dark Night of the Soul, the collaboration between Danger Mouse, Sparklehorse, and David Lynch with vocals by James Mercer, Wayne Coyne, Gruff Rhys, Jason Lytle, Julian Casablancas, Frank Black, Iggy Pop, Nina Persson, Suzanne Vega, and Vic Chesnutt, is being scrapped due to a legal dispute with EMI.

Perhaps out of spite or maybe just acknowledging the fact that people who want to hear this music already know how to download it, Danger Mouse is releasing a blank CDR along with the 100-page book of David Lynch’s photos for $50.

This whole thing just seems preposterous. EMI couldn’t work out an arrangement to get this officially released? Or did Danger Mouse just forget to read the fine print on a contract? Either way, it’s a shame. The stream sounds really good: more Sparklehorse than Gnarls Barklay, if you know what I mean.

END_OF_DOCUMENT_TOKEN_TO_BE_REPLACED

The Strokes are taking a break, having recently wrapped touring in support of First Impressions of Earth, produced by the guy who dumped Wilco. They leave their fans with a “cinematic interpretation” of the album’s lead track, “You Only Live Once,” directed by Star Wars prequel concept artist, Warren Fu, who also helped redesign the official Strokes site.

The Strokes – “You Only Live Once” (imeem)

“Juicebox” by the Strokes, from First Impressions of Earth, due January 3, 2006, on RCA.

END_OF_DOCUMENT_TOKEN_TO_BE_REPLACED

The Strokes are currently recording their third album, and they’re working with a new producer: David Kahne. Kahne is the guy at Warner Music who told Wilco that Yankee Hotel Foxtrot would kill their career and refused to release it. Strokes manager, Ryan Gentles is “confident that [the Strokes album] will come out sometime this year.”

END_OF_DOCUMENT_TOKEN_TO_BE_REPLACED

Don’t believe the hype – The Guardian slams the Strokes, James Brown, the Clash, Pet Sounds, the Stone Roses and lots of other rock icons.

Iggy Pop was fucking the camera. Lithe like a Romanian gymnast, his lifelines disappearing craggy into low rise jeans, the punk father writhed onstage like a human snake razor blade, and the camera beamed it into outer space. A veteran sex simulator and the energy source of his reconstituted Stooges, Pop’s completely unfakeable yowls, tumbles and cabinet climbs were typical of a show that delighted in refreshing the stale rock festival concept. There were a few flecks of grey in this 21st century version, and the occasional mohawk’d toddler waddled on by. It also took place in the shadows of a giant orange mocha frappucino. But with his Underground Garage Festival, Little Steven Van Zandt made his vibrant music id a touchable thing, and the jabberwocky prattlecock of today’s industry faraway for at least a day. And New York City rocked like a hurricane.