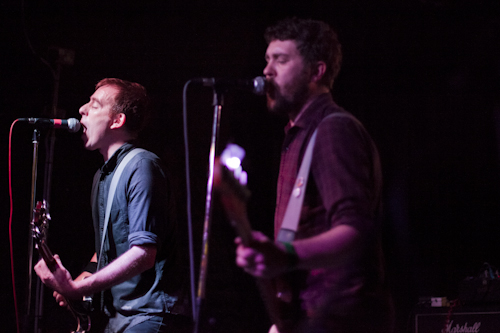 Ted Leo And The Pharmacists

It was a night when Ted Leo hurtled through his set as he and the Pharmacists battled against the venue’s curfew. Their playing was on time they delivered their set with enough spare time to come back for an encore.

END_OF_DOCUMENT_TOKEN_TO_BE_REPLACED

Where have all the rude boys gone?

They’re pounding the pavement, looking for work in our wi-fi layered neighborhoods, too busy trying to become a part of the system rather than rebel against it.

It’s called getting older, and while it’s something to fear for a few years in your twenties, you eventually begin to realize that it’s inevitable. The least you can do is to hide just how much you’ve really sold out to your friends who are still holding on to their righteous ideology while perfecting their latte art instead of perfecting their resume.

Don’t worry. They’ll eventually sell out too and all of that progressive zeal will be replaced with complacency and compromise. Hell, even Ted Leo is beginning to get softer lyrically while cleverly revisiting the same blend of Attractions‘ bash that made him such a vital voice during the Bush II administration.

END_OF_DOCUMENT_TOKEN_TO_BE_REPLACED

• The White Stripes, ‘Under Great White Northern Lights’ (through March 16)

And AOL/Spinner is streaming the following new releases through Sunday, March 14:

END_OF_DOCUMENT_TOKEN_TO_BE_REPLACED

• Ted Leo and the Pharmacists – “Even Heroes Have to Die”

END_OF_DOCUMENT_TOKEN_TO_BE_REPLACED

Just because it’s been several months since we’ve done a Forkast update, it doesn’t mean we haven’t been paying attention.

• The Long Blondes – “Here Comes The Serious Bit” from Couples, out now in the UK and due May 6 in the U.S. from Rough Trade

• The Dodos – “Ashley” from Visiter, out now on Frenchkiss

A bunch more after the jump…

END_OF_DOCUMENT_TOKEN_TO_BE_REPLACED

It’s going to read like How Not To Write Record Reviews With Cliches 101, but there are times when you can’t avoid em: We need Ted Leo now more than ever. (I will pause so you can get all the groaning out of your system.) But hear me out.

In a world full of Ford commercials drawling “This is OUR country,” where our government is destroying secret laptops and refusing to answer questions about it, where the names of more and more 19-year-old kids dying in Iraq are scrolled across the Sunday morning news programs every week and yet somehow the paternity of Anna Nicole Smith’s baby is still making headline news, where are the people who are just a little bit scared of waking up every morning in the Land of the Free supposed to find comfort?

You could do worse than starting with Living With The Living.

END_OF_DOCUMENT_TOKEN_TO_BE_REPLACED

The Sons Of Cain

Ted Leo and the Pharmacists – “The Sons of Cain” and “Bomb.Repeat.Bomb. (1954)” from Living With The Living, out now on Touch and Go.

END_OF_DOCUMENT_TOKEN_TO_BE_REPLACED

Some recent good stuff from Forkcast:

• CSS – “I Wanna Be Your J-Lo” Sleater-Kinney interpolation from a BBC session.