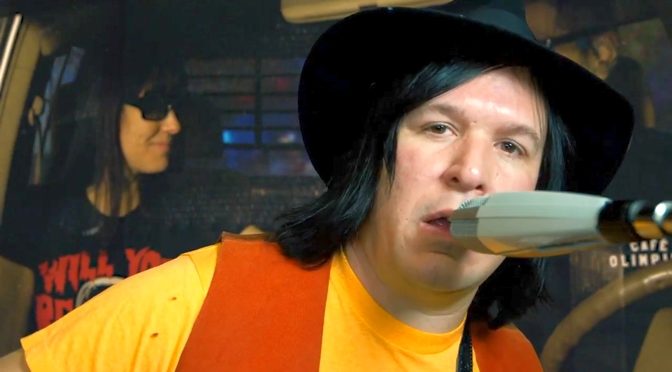 MP3: The Warlocks – “Red Camera” from The Mirror Explodes, out May 19 on Tee Pee Records.

This is a slow-burning bum trip of a jam. I’ve always respected Bobby Hecksher, but I prefer the Warlocks when they’re making feel-good dance music like “Shake the Dope Out” or “The Dope Feels Good.” Why do bands have to get all serious and stop writing catchy pop songs?

Tee Pee Records releases a ton of this sludgy, Sabbath-esque psych, some of it better than others. Check out some recent and upcoming stuff:

• Black Math Horseman – “Origin Of Savagery” from Wyllt, out now.

END_OF_DOCUMENT_TOKEN_TO_BE_REPLACED

MP3: The Warlocks – “So Paranoid” from Heavy Deavy Skull Lover, out now on Tee Pee.

Stripped down from an eight-piece to a four-piece, Bobby Hecksher and his streamlined crew bring back the psychedelic brain sizzle they’ve perfected. Great album art, too.

END_OF_DOCUMENT_TOKEN_TO_BE_REPLACED

The Warlocks are being sued and they need your help. Buy some merch. If you’re unfamiiar with the Warlocks, this 2002 article will fill you in.

END_OF_DOCUMENT_TOKEN_TO_BE_REPLACED

The Warlocks – The Phoenix Album (Birdman)

Almost as soon as I put in the new Warlocks album, I felt that familiar metallic taste in the back of my mouth. I took a deep breath and stretched out as “Shake the Dope Out” swirled around the room with its chugging, Velvety guitars and organs. And the background vocals going la la lahhhhhh. Ahhhhhh.

The Phoenix Album will keep you clenching your teeth and seeing visuals through every one of its sixty-four minutes. It’s sequenced to be the soundtrack for a perfect, one-hour rock and roll trip, complete with peaking and coming down and lots of good noise in between.

“Hurricane Heart” contains the coolest one-note bass line ever recorded, and “Baby Blue” could be a Banana Splits song if not for the degenerate bass line and drum parts. But you can’t go wrong singing about pretty pictures and circular cars, disco bars and cool guitars…

While drugs are certainly not required to enjoy this album, it might be hard for a clear-headed listener to make it through all 9+ minutes of “Cosmic Let Down,” especially its two-minute finale of a single key held down on a solo Farfisa organ. But sticking with it will make the poppy track that follows sound even fresher in comparison: Oh, don’t you worry, I’ll be all right, I’ll be all right… Oh, the dope feels good.

Sometimes it’s hard to remember that there was only a year or two between the apex of American garage punk (1966) and the dawn of psychedelia (1967-68). And don’t forget that at the exact same time that a million teenagers across the world were trying to figure out the chords to “Get Off Of My Cloud” there were a handful of kids eating shitloads of acid and then making music to take it to… I can only imagine that the Warlocks’ “Inside and Outside” sounds like what it must have been like to be one of those precocious kids who happened to find himself drooling at the 1966 Dylan performance in Newport. It’s even got a Bob-like “Awwww” and a harmonica solo! But then it rides the groove right off the edge into classic psych territory complete with a moog freak-out and a false ending. Far out.

Phoenix is a great album in the all too rare style of music that falls somewhere between garage rock and psych, before the kids got too self-conscious and too self-aware to want to rock out and dance, and still wanted to just make some noise!