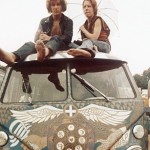 His book is broken into 67 shortish sections, most of them dealing directly or indirectly with the counterculture, but a number covering extraneous subjects: the Sharpeville massacre in South Africa, the Vatican’s “Humanae Vitae” encyclical, the Arab-Israeli Six-Day War, the Watts riots, the Vietnam War and so on. By placing the decade’s cultural convulsions in a global perspective, DeGroot makes them look considerably less monumental, and a lot more irresponsible, than they did when examined through the glass of a bong, darkly.

This may make DeGroot sound like a finger-wagging moralist. He is, a little, but he doesn’t get carried away — and his critique comes from the left, not the right. Unlike Bloom or many conservative critics, DeGroot doesn’t see the ’60s as the decade when everything went wrong. He regards the counterculture as a sometimes innovative, often fun but essentially superficial phenomenon, one that achieved very little and may have actually backfired.

Other than increased polarization and rampant consumerism, what did the hippies really accomplish? This is a question that we’ve asked before, but it has yet to be resolved. I would suggest that the two leading candidates for the Democratic Party’s presidential nomination point to some kind of significance… But then again, even that won’t mean shit if they get their asses handed to them by a half-dead white dude whose great-great grandfather owned Mississippi John Hurt‘s mom.

Keep in mind that Brown v. Board of Education was decided in 1954, and the Civil Rights Act of 1964 was passed before the Beatles had even tried marijuana, so the hippies can’t take credit for that.

13 thoughts on “Did the Sixties counterculture achieve anything?”