Remember when you used to have to wait until after Thanksgiving to hear your favorite Christmas carols? Not anymore. Many radio stations across the country switched to an all holiday format after Halloween this year. And who can blame them? People love Christmas music.

But it’s easy to get tired of the same old versions of the same old songs performed by the same old singers. It’s a rare treat to hear someone take a standard and make it their own. But that’s exactly what Julian Koster does on The Singing Saw at Christmastime. You’ve heard all these songs before, hundreds of times (“Frosty the Snowman,” “White Christmas”), but they’ve never sounded like this.

The first time you hear the sound of a singing saw you might assume it’s a weird electronic synthesizer, maybe a Theremin or an early Moog. It’s a weird, otherworldly sound that conjures images of Martians frolicking on their spaceship. Not overtly creepy, but strange and disconcerting. Which makes it perfect for Christmas music, of course…if you’re a little twisted.

Julian Koster, the cherubic goofball behind the Music Tapes, and—more famously—multi-instrumentalist in Neutral Milk Hotel, has had a busy year. 2008 has seen the release of a new Music Tapes album, Music Tapes for Clouds and Tornadoes, and the Elephant 6 Holiday Surprise Tour, which Koster organized, and now a Christmas album. This, from a guy who’s been pretty much off the radar since 1999.

The Singing Saw at Christmastime is not an easy-listening Christmas album. It will probably annoy your parents, aunts, and uncles if you put it on the stereo at your holiday gathering. Your favorite grandmother, though, the one with the half smirk and a twinkle in her eye, the one who slipped you cinnamon candy that you weren’t supposed to have, the one who the rest of your family thinks should no longer drive, the one who let you drink coffee with heaps of sugar and cream when you were seven years old, she’ll think The Singing Saw at Christmastime is lovely. She may even slip you a five-dollar bill when nobody’s looking. 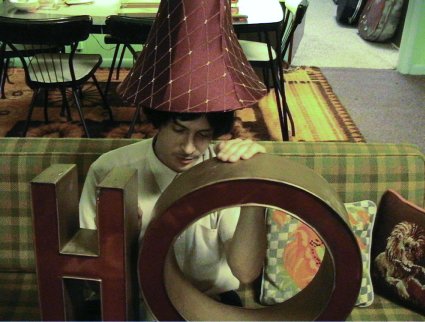 Singing Saws sing all by themselves. The idea that a Human Being could play one, as one might a cello or a tuba, is a common and understandable misconception, as this illusion is encouraged and cultivated by the Saws themselves. Saws are tremendous pranksters, and the ruse of causing Human Beings to believe that they are actually playing them is perhaps the most beloved and persistent joke in Saw-kind’s long history. […] A Saw can be encouraged to sing by taking it into one’s lap and cradling it there, while gently petting it with a small violin bow. Many of the Saws who sang on this record were encouraged to sing in this way. Some of the others, especially the youngest as well as the choir from the Singing Saw Symphony, sang without need of any such coaxing. This I have witnessed them do on several occasions. It was a challenge in the making of this record that they have thus refused to do so in front of the smallest audience. Even when recording, the Saws often waited until the album’s co-producer Nesey Gallons retired to the control room before beginning to sing.

4 thoughts on “Julian Koster – The Singing Saw at Christmastime”