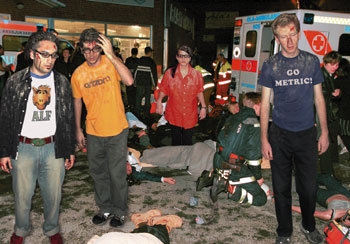 “These people are simply not in the physical condition to survive this sort of trauma. It’s just a twisted mass of black-frame glasses and ironic Girl Scouts T-shirts in there.”

Of course, less than a year after this article was published, the Rhode Island Great White disaster rendered these kinds of jokes rather distasteful. But hey, four years after that, and the Onion story is funny again! Time heals…

“I haven’t seen this much senseless hipster carnage since the Great Sebadoh Fire Of ’93,” said rescue worker Larry Kolterman, finding a green-and-gold suede Puma sneaker in the rubble. “It’s such a shame that all those bastions of indie-rock geekitude had to go in their prime. Their cries of ‘sellout’ have been forever silenced.”