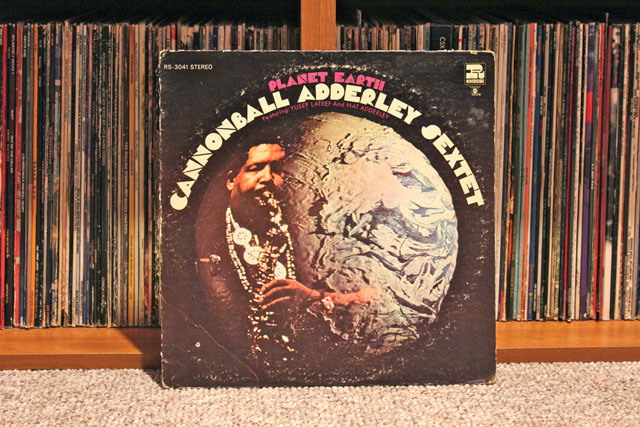 So after fighting through not one, but two Asia albums in a row and peeking ahead at the next slab of vinyl on the shelf and realizing it’s a record that actually belongs to my wife, I have decided to throw the first curveball and grab an “A” record out of the jazz bin.

I have far fewer jazz albums than rock by a factor of maybe 10. But I grew up listening to jazz, because my dad is a huge jazz expert and has an amazing collection. So I know enough to be dangerous and I certainly have my favorites, which tend more towards the great albums from Miles Davis and John Coltrane, especially the stuff from the ’60s and, in the case of Miles, the ’70s.

I bought Planet Earth in college for not much money, during a confusing time where I was trying to listen to jazz on my own and not really liking it much because I hadn’t yet figured out the whole chronology and evolution of jazz, and couldn’t understand why when I liked, say, John Coltrane on A Love Supreme, I would get bored with some of his earlier, more traditional work. I think what attracted me to this record was as much the hippy dippy cover art as anything, other than a vague notion that “Cannonball” Adderley’s unique name resonated with me as “one of those guys my dad likes, so he has to be good.”

As I found out after bringing it home, as much as Planet Earth is a Cannonball Adderley Sextet album, four of the cuts are Yusef Lateef songs. (The other was written by Joe Zawinul, Adderley’s longtime piano player, and is literally tacked on to the end.) I immediately developed a liking for Lateef, one of those tenor saxophone players that I believe deserves far more respect than he gets outside of hardcore jazz circles, given how much of an influence he was on Coltrane’s later free jazz period. Lateef’s playing here sounds free enough to inspire, but without all the noise that can make listening to later, more atonal free jazz so difficult. He does play oboe on two tracks on Planet Earth, “Brother John,” a wild tribute to Coltrane (who was still very much alive when it was recorded), and “Syn-anthesia.” They are my two favorites on the album, because, well, how often do you hear anyone playing an oboe, let alone wailing on one?

Jazz is about improvisation, and live jazz is really where it’s at when it comes to developing an appreciation for the art form. It’s taken me years to grasp even the most basic ideas behind jazz, but this is one that even rock fans should be able to appreciate: “Live music is better bumper stickers should be issued!” These cuts are all live (save for the Zawinul song at the end) and full of energy and thus contribute to this being an outstanding collection.

Planet Earth is, like so many vintage jazz albums, a reissue of stuff designed to put cash in the record company’s pocket. Released on the “Riverside” label in 1969, roughly six years after the real Riverside Records went under, the album was actually a product of ABC Records, the music division of the TV network. The back cover liner notes, although interesting and written by Down Beat Editor Dan Morgenstern, conveniently don’t mention where any of these tracks appeared earlier. While my personal Cannonball discography is bereft of any other titles, likely sources include live albums released from the Sextet’s 1963 Japanese tour and a live album recorded at the Village Vanguard in New York City a year earlier. While I tend to eschew these sorts of compilations when it comes to rock music, the jazz world is so seedy that they’re unavoidable. And I’m just not that much of a purist when it comes to my jazz collection anyway.

Runout Groove: It may be a dodgy reissue, and I may have paid just 50 cents for it, but a compilation of this quality that’s never been released on CD is the best kind of keeper.