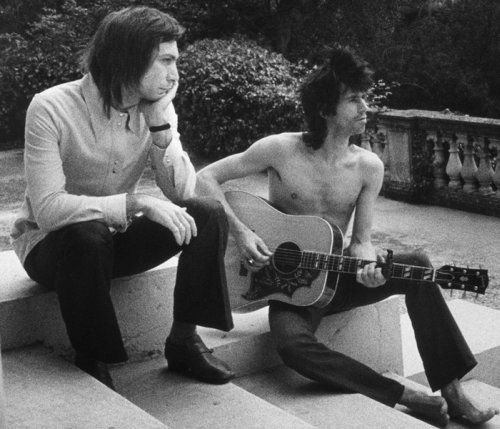 This is why Charlie Watts is the coolest Stone. When asked by Rolling Stone magazine what he thinks of the Exile reissue, the levelheaded drummer admitted, “My only criticism of the new ones is that the voice sounds like it was done yesterday.”

The article, “Making Exile,” in the latest issue of the magazine (not online) answers a few of our remaining questions about the ten previously unreleased bonus tracks: “Five of them had never been fitted out with vocals, or even lyrics, and Jagger set about finishing the job. […] Jagger brought Taylor into a London studio for a couple of hours last fall to put on ‘those Mick Taylor lead lines’.”

At least that’s what he’s saying this week. The story seems to change from interview to interview.

In other Exile news, there’s a fantastically sensationalistic article from the UK’s Daily Mail with all the gossip you could ever hope for: The most debauched album ever made: As a Stones classic is re-released, the truth about wife-swapping, all-out war between Mick and Keith and heroin on tap in an old Nazi HQ. Good times.