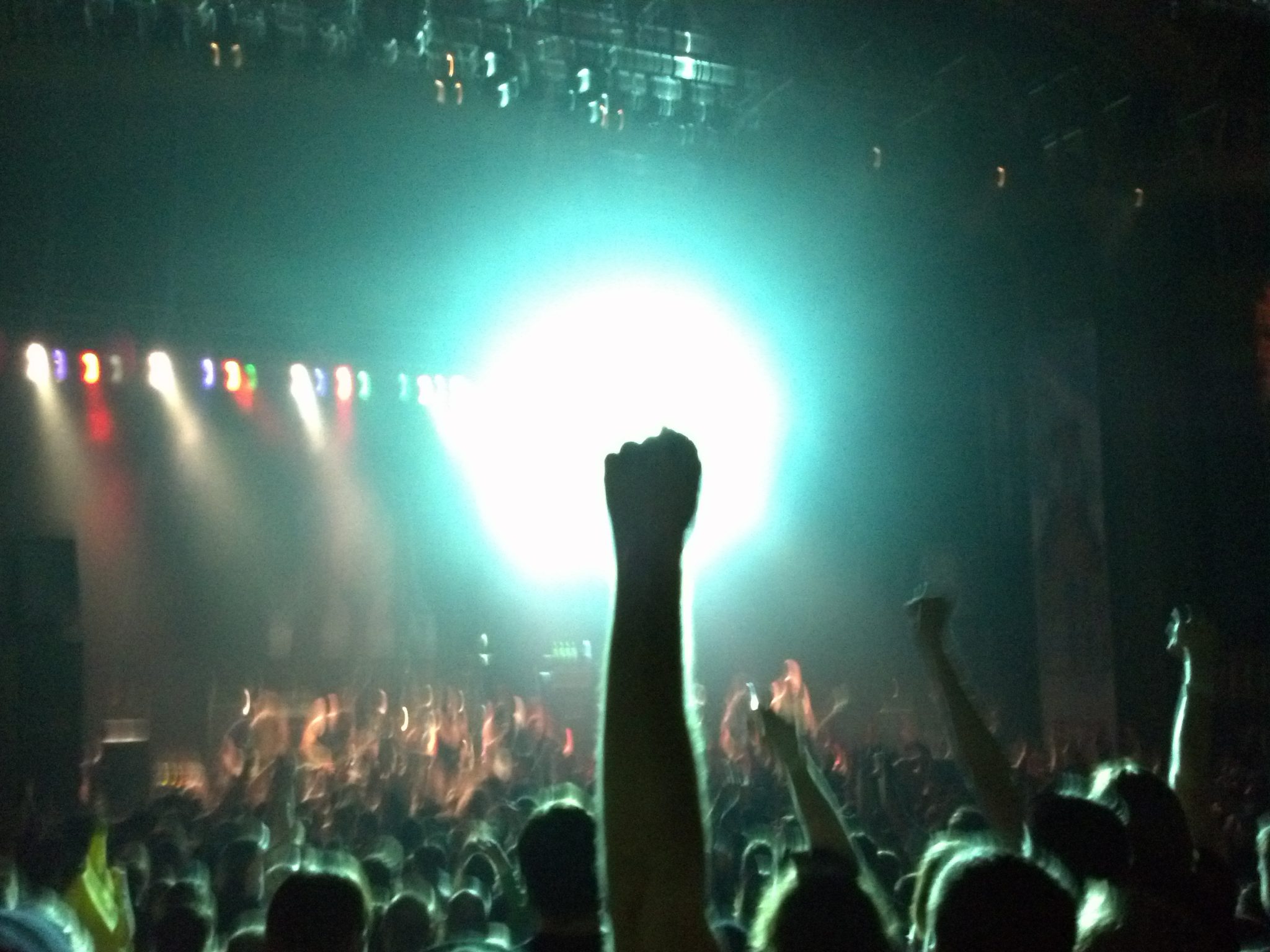 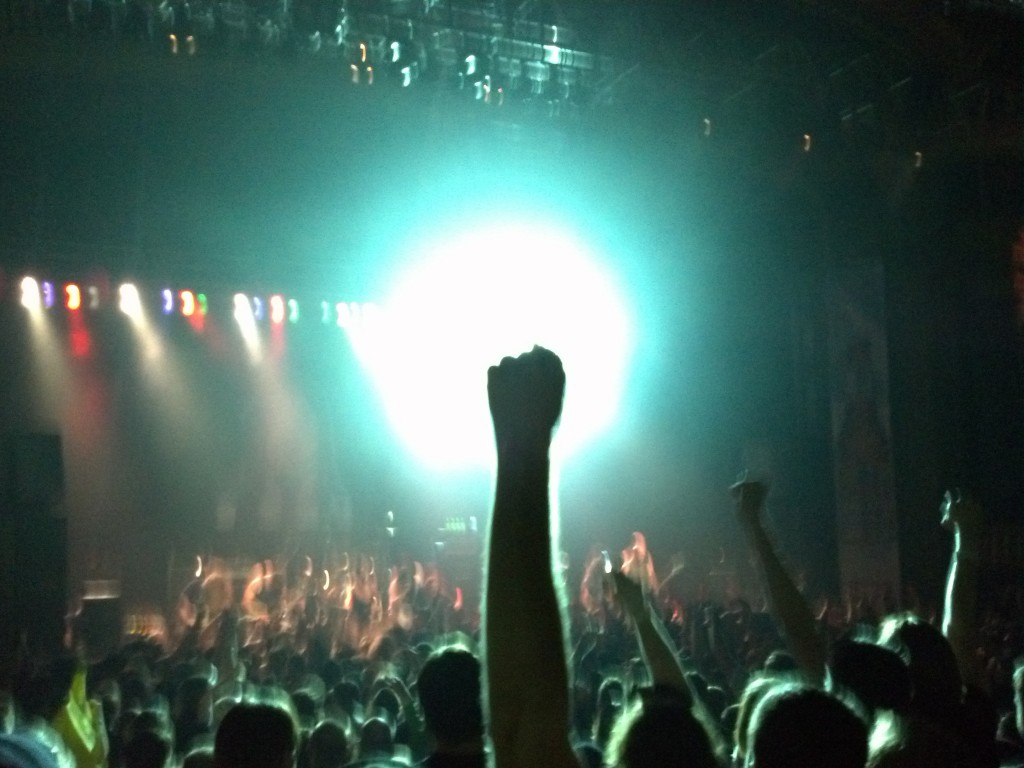 All of the dudes were there, and that was just on stage. Flanked by four wild-haired guitarists, plus a drummer and his black leotard-clad wife, Andrew WK stood in a party line of his own making and flailed, writhed, pumped his fists to the rager soundtrack of ten years ago. This was the I Get Wet tour, featuring WK in all of his lank white denim glory ripping through the record that made him a star with the same heaping helping of gusto he’d brought out on the road in 2002. Clod-stomping metal riffs were kicked up against WK’s own keyboard flurries and supported with double-bass kicks that kept a hard and fast rhythm on two drum heads, each emblazoned with the maestro’s bloodied face. It was the same iconic shot from the I Get Wet cover art and the one that hung over the proceedings like the visage of a master propagandist. This was WK for Vendetta, and the crowd was eating it up.

“We are fortunate to be here tonight, to live here and be alive,” WK enthused to raucous cheers. And later, “Never forget the power of musical joy.” It was the same metal-vational speech he’d spouted between (too long) pauses back at Metro in 2002, and this time around he couldn’t resist playing a bloodied Tony Robbins once again. It was too much talk, not enough rock. The crowd was eating it up, sure, the same way the pit surged to the left and right during highlights like “Party til You Puke,” “Party Hard,” and the title track, hundreds of kids pushing at the stage in a tangled mess of frenzied limbs, following along with every hair whip and judo chop of their fair leader, who seemingly hasn’t aged in the interim. But WK’s shtick, fully invested as he is, still seems like shtick at heart. There’s a gear missing, that extra rev into crazed that turns a rock and roll show into a mirthful murder spree. He had so many guitars at his disposal, and so much hair whip back and forth. He had the ears and fists of the crowd in his hands. So why was the Riviera a stolid line of folks with their arms folded once you reached the sound board level? And why wasn’t that sound ripping hearts out of chests? It felt like an act, not an act of the party gods.

The post-9/11 fatalism that I Get Wet embraced and espoused in 2001 and 02 has its partner in the fuck-it-all, glittered-up party ethos of LMFAO and Ke$ha, and WK has savvily brought the record back to not only celebrate its birth, but indoctrinate a new flock to his projectile rock. And they were down there, eating it up. But just like his strange question-and-answer sessions of a few years ago, or his incessant web cam party patrolling on Twitter, WK’s rings of egoism before it does altruism. No one can question the stripped-to-its-core genius of “Party Hard”; it’s an anthem that wears the animal skins of a thousand other anthems into a battle against boredom. But why does the whole thing still feel like self-righteous zealotry and not visceral release? Why does it ultimately feel as shallow and rootless as LMFAO’s “Party Rock Anthem”? Maybe that’s the populism innate to the I Get Wet material, though. Like a beer bong or box of fireworks, WK offers a necessary tool kit with which to party, but doesn’t do the real puking or exploding until your neighbor calls the cops. It’s always up to us to never stop living in the red. 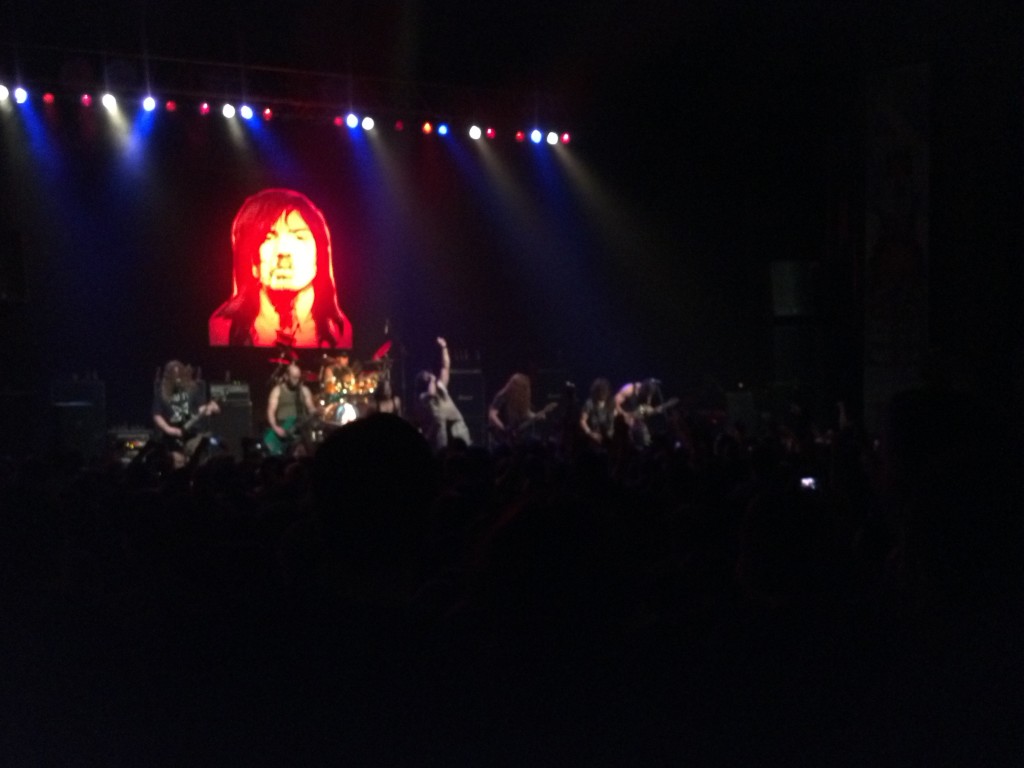 One thought on “Andrew WK Live in Chicago: Ten Years After”