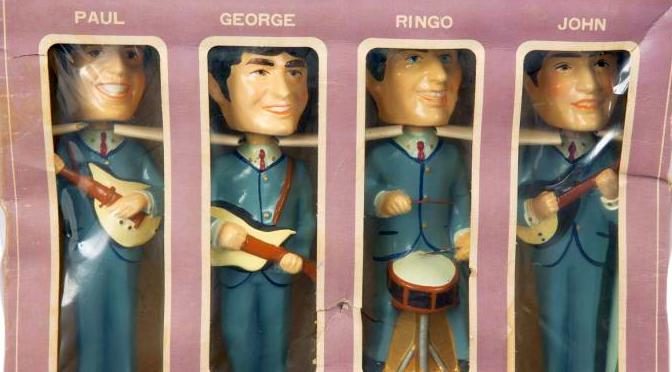 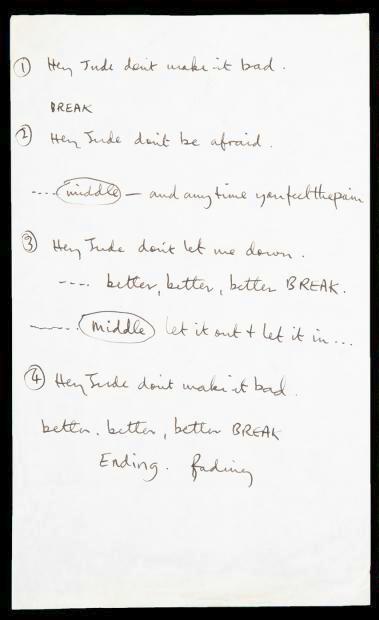 The big news was that Paul McCartney’s handwritten “Hey Jude” lyrics sold for $910,000. The estimate that the house had set was from $160,000 to $180,000. Obviously, someone really wanted that piece of paper. Here’s something to ponder: Given that Paul McCartney is still alive, and has access to black felt-tipped pens, what if he was to write them down again. Almost precisely the same way. Now certainly we have a tendency to value something that is “original” versus something that is a copy, but if the originator is the one who is making the second version, with the exception of the time that has passed between July 1968 and now, how less authentic is that second piece of paper? What if McCartney is working from home, bored, and decides to make copy after copy after copy? What then of the original? Still worth as much. Let’s say that McCartney decides that he is going to not only write down the lyrics but provide annotations as to his thinking about this phrasing or that? Would that make that version worth more than $910,000?

Most of the things sold at the auction do not have that level of Beatles’ involved authenticity. Yes, there are lots of things with their signatures, but signatures don’t have the same level of commitment as the lyrics to the song that became the best-selling single in the U.K., the U.S., Australia, and Canada in 1968.

But there are some odd damn things that were part of the auction. 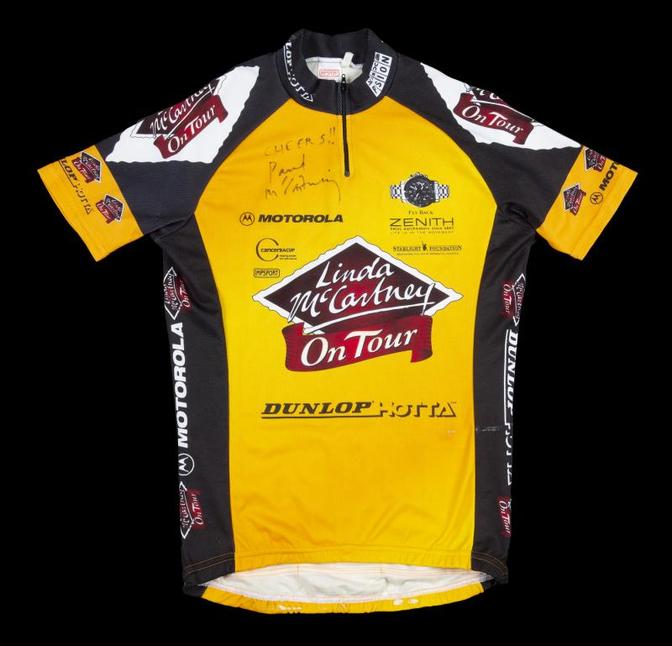 Let’s take lot 206, which followed the lyrics. It is “Paul McCartney Signed ‘Linda McCartney On Tour’ Cycling Team Jersey.” Yes, we are talking about a shirt that is worn by a bicycle racer, a short-sleeved T that has logos of Motorola and Dunlop, etc. plastered on it as well as, front, center and on the shoulders, as well, a graphic proclaiming “Linda McCartney On Tour.” Apparently she sponsored a cycling team in 1999. McCartney, using what could have been a black felt tipped pen, wrote “CHEERS!! Paul McCartney” on the shirt. That was estimated to go for from $800 to $1,200. It sold for $3,840. Along with the jersey there is a letter from the team general manager to a person to whom the jersey was originally sent. The letter is dated “22/7/99.” Ms. McCartney died 17/4/98. (Yes, using the ISO 8601 standard for writing dates in the manner specified within the European Union.)

There was a “George Harrison 1960s Owned and Used Steering Wheel.” Yes, a car steering wheel. Wood rim with an aluminum center hub. Thought to have come from one of his Jaguars. Who takes their steering wheel out of a car and gives it to one of their employees, as Harrison evidently did? Yes, Harrison was an automotive enthusiast, and apparently the person to whom he originally gave the steering wheel was, too, but unless there was some sort of shortage of steering wheels in the U.K. in the mid-1960s, it seems rather outside the norm of gifts. The estimate for that object was from $2,000 to $4,000. The winner—and the only bidder—got the steering wheel for $2,240.

One strikingly unusual object(s): “Ringo Starr L-Shaped Sofa and Chair.” Yes, something that people ordinarily donate to the Salvation Army, “A gold velvet modern L-shaped sofa and matching club chair, both with patchwork brocade accent pillows.” Apparently this is from a domicile of Starr and Barbara Bach—clothing worn by both were also sold in the auction.

And to bring in the last member of the band, there was a handkerchief owned and signed by John Lennon. The official description has it:

A white handkerchief with an “L” monogram inscribed by John Lennon “Mrs. Wilson for when your [sic] old and grey Love any shoplifting John Lennon x.” The handkerchief is housed in a frame with a color image of Lennon and a typed note that states that the handkerchief was signed by Lennon when he purchased a supermarket in Hayling Island near Sussex, England, for his old school friend Pete Shotton in May 1965. Lennon signed the handkerchief to the woman who sold him the market.

Seems like for some people (with money) Paul is still the cutest Beatle.