According to the drunk twenty-something standing in front of me, I’m a “fun hater.” I should know better than to go to a music festival… I’m too old and crabby to efficiently deal with the younger bums and their plastic cups sloshing lukewarm Miller Lite all over the place… But I was tempted in the guise of a fairly decent line-up and a varying degree of Iowa pride to attend the inaugural performance of the 80/35 Music Festival in Des Moines, Iowa over the holiday weekend.

If a promoter in Iowa has the good sense to book Drive By Truckers, The Roots, Frank Black, The Flaming Lips, and a few other notable acts for their festival, then as an Iowan I’m obliged to lend a modicum of support behind it and travel the two hours to the Hawkeye state capitol.

We secured babysitters to check out the Friday night show where the Flaming Lips, a band that seems to attract themselves to festivals like mayflies are attracted to Fresnel lights, would be celebrating Independence Day with us. This would mark my wife’s second Flaming Lips show (her first was at another festival in Ohio a few years ago) and probably my tenth. I’ve seen them in various configurations and have enjoyed nearly every one of them immensely.

In fact, I would reserve two of my top ten best concerts ever for the Lips: the first from a small club during their power trio phase of the late 80s and the second at a larger club, The Soft Bulletin tour, where they were incorporating their headphone experiments and just beginning to work video segments into their setlist. As different as the two shows were, there was a sense of adventure to them and even moments of sheer amateurism. You could see the “play” icon on the projection screen of some of those early forays into playing against a video backdrop and the stage was overrun with gaudy effects seemingly purchased at the local Spencer Gifts store.

It was wonderful because it was real and the spontaneity came in the danger that some of this jimmy-rigged equipment wouldn’t even work. Pressing the potential fiasco forward was Wayne Coyne, a veritable Ed Wood of rock showmanship, just pleased as punch that he was up there performing at all and obviously having a blast doing it.

He hasn’t changed at all. But I have. 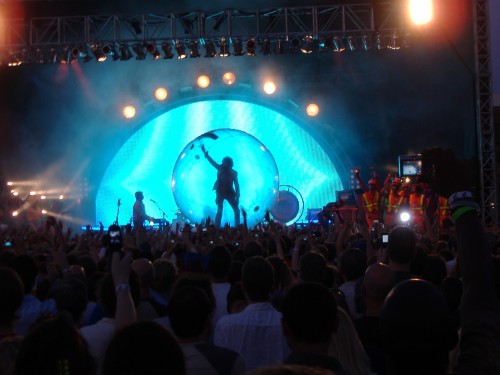 The Flaming Lips are one of the greatest bands you’ll ever see live. The first show will make you think this and the second one will confirm it. By the time you get to your fifth or sixth show, the shtick starts to wear thin. It has nothing to do with the band’s intent or integrity; it has to do with the repetition of the event and how little it deviates from show to show, even when you spread years in between them. You’ll begin to get annoyed at having to watch the same Jon Stewart introduction to “She Don’t Use Jelly” repeatedly. In fact, you’ll get positively sick of the song itself, regardless of who’s introducing it, because it seems to end up on every setlist, night after night.

It makes no sense that a band with over twenty years of some of the most consistently great records focuses nearly every show on the same material with an occasional surprise tune thrown in. Check the setlist and I’m sure you’ll find “Jelly,” “Yoshimi,” “Race For The Prize,” and “Do You Realize” on nearly every stop.

The Flaming Lips have become such a reliable band of merry pranksters that they’re synonymous with festival events. On the other side, there is so little improvisation in their setlists now that the only danger is if a piece of confetti gets caught in your eye.

Everything is by the book now and Des Moines was treated with yet another ninety minutes of obligatory crowd pleasers, endless song reprises and incessant banter at every stopping point.

The majority of the audience was oblivious to all of this and seemed to appreciate the band’s continual on stage shenanigans. While the video screens played rerun visuals, we began to pay more attention to the crowd around us. Next to us was a woman missing a leg in a wheelchair. I didn’t wonder how she lost the limb; instead, I wondered how she could see anything from her low vantage point. There was another woman who seemed more thrilled that she had found a hula-hoop after going on a beer run than actually being at a Lips show. The man next to her drummed incessantly with a pair of cheap glow sticks that somebody threw at him. But the most amazing crowd member had to be the chubby boy in front of us, curiously dressed in some too short cut-offs, an upside-down Corona visor (complete with a lock of hair standing up from a woman’s hair tie) and a t-shirt that was curiously hitched up between his armpits, exposing his rotund belly in the front and visible boxer shorts from the rear. Even more amazingly: another man came up to him and bought his shirt literally right off of his back. The shirt read “When In Doubt, Take Your Pants Off” on the back of it and this piece of screenprinted wisdom cost the buyer twenty large.

The crowd around us became fixated with the many big balloons that bounced around the grounds. They continually tried to get those in front of them to bounce the balloons back and when one made its way back, they began to invade our personal space while trying to reach for the elusive party toy.

“I’m going to pop that fucking balloon if it gets near me! I swear to God I’ll pop that thing!” I yelled to the space invaders as fair warning.

I was there to watch a fucking concert…not play with balloons.

“I’m all for fun,” I replied. “But that balloon is yellow and I hate yellow. Yellow is the color of La-La (the Teletubby)…And La-La plays for the other team…And do you know who ‘the other team’ is?”

“Homosexuals?” The young man replied back, drawing out the words sensing I was trying to be funny with him.

“No.” I corrected. “The other team is Council Bluffs.”

My dialogue of nonsense left the intoxicated gentleman confused; the drunks in front of us didn’t bother us the rest of the night.

I don’t consider myself a fun hater. I consider myself a fan of The Flaming Lips who has grown tired of the repetition and lack of chaos that once was a valuable part of their live shows. The visuals have now officially become the primary draw here with the music itself taking a backseat.

What saves them from my complete contempt is Coyne himself, who projects every distraction with honest ambivalence and seems genuinely appreciative of the audience he works hard at entertaining. He uses the microphone to provide countless “thank yous” and meandering song introductions. As annoying as this can be, it gives a glimpse into the heart of a true Everyman, someone who worshipped at the alter of rock and roll so much that he found himself leading the congregation.

Des Moines threw their faith right back, obediently singing the words when Wayne pleaded with them to, screaming the word “fuck” during the moments he instructed, and providing the band with raucous applause after each song. As a veteran of double digit Lips shows, it was par for the course at best, but the time of their life for a few souls who hadn’t experienced the Oklahoma freaks before. Indeed, I personally observed one man on the way out confiding to his female companion that the show was “one of the best concerts I’ve ever seen.”

I remember feeling that way once too, but I’ve developed a tolerance to their choreographed hi-jinks. Like any good mind-altering experience, the Flaming Lips are best when they’re enjoyed in moderation.

Race For The Prize

The Song Remains The Same

She Don’t Use Jelly