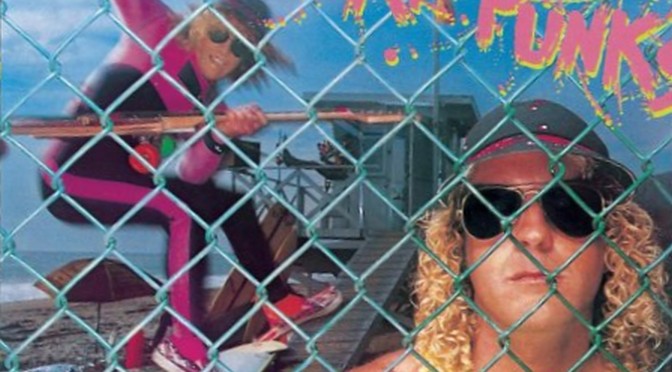 The Surf Punks were not a good band. But I loved their album My Beach when I was in high school. It’s pretty embarrassing to admit, but that was one of my first exposures to “punk rock.” If you can call it that. And you really can’t.

But the influence they had on me was huge.

I was introduced to the Surf Punks by a guy in my church youth group, which I attended every Sunday along with a midweek Bible study and various other youth group activities. The church kids were my friends and we hung out together outside of sanctioned church events, too.

Dan was a little older and had a Volkswagen and tons of chest hair. Not just tons for a teenager, but tons in general. Like Burt Reynolds. Dan had a rule that you should never have more than three buttons on your shirt buttoned at the same time.

And he loved the beach. Every weekend all summer long, we’d pile into his Rabbit and drive the half hour to Lake Michigan, windows down, stereo cranked.

And the soundtrack to this drive? Surf Punks. My Beach.

But this was an unusual selection. The standard soundtrack to this weird time in my life was Christian rock, like Steve Taylor. The Surf Punks were one of the only secular bands we listened to together.

We were good kids. Dan would actually drive with his hand on the volume knob so he could effectively mute the swear words. “Somebody ripped my stick / That guy must be a [silence] / I guess I finally ran out of luck / If I ever find him, he’s gonna get [silence].” Prudish? Sure. But sincere. Good kids. Nerdy, but earnest.

I always saw myself as the black sheep of the youth group. I wasn’t raised in the church like most of the other kids. My mom didn’t accept Jesus Christ as her personal Lord and Savior until after my dad got cancer. Before that, she was just a normal child of the sixties with all that that entails (music festivals, motorcycle trips, etc.). After my dad died, she decided our Lutheran church was too liberal because they wouldn’t fire the gay youth pastor. True story. So we switched to a nondenominational, evangelical church when I was in junior high.

We were a bit out of our social class at the new church. The congregation was hardly ostentatious, but they were all strongly middle- to upper-middle class white collar types. My mom and I were not poor, but she was a single parent schoolbus driver with no health insurance. There were no liberal arts degrees in my extended family, but we always had at least two Harleys parked outside my grandparents’ house for spaghetti dinner on Sundays.

So I was not one to be offended by coarse language. Even if I had recently come to learn that profanity offends God.

But still, Dan kept his hand on the volume knob. Sometimes when it was just me and him, he’d just let it play, but it always felt awkward.

During my sophomore year in high school, I made other friends. Less churchy. I noticed I was behaving differently around my church friends than how I acted around my new friends. But the Surf Punks transcended that peculiar, self-imposed barrier. Everybody can appreciate the irreverent sentiments of “Big Top” (“Too big, too big for her top / When are those strings gonna pop?”), even if it makes some people feel a little guilty for entertaining impure thoughts.

When it came time to order class rings later that year, I wasn’t really sure what to get on mine. People who played sports would naturally select the “basketball player,” or whatever. Paging through the catalog of class ring customization options, I found something that seemed perfect: a surfer.

It’s true that I had never actually touched a real surfboard. I didn’t even skate. But the surfer was perfectly preposterous, so that’s what I got. Some of my friends didn’t quite get it, but I didn’t care. What else was I going to get on it? So yeah, I was the dork with the surfer on his class ring.

And it’s all due to the Surf Punks. And, of course, my friend Dan. I wonder if he knows I think about him every time I button my shirt… Especially in the summer when I’m heading outside and my wife is wondering why my belly’s hanging out of the bottom half of my only partially buttoned shirt as it flaps open in the breeze.

My Beach has been out of print for a while, but now you can buy the MP3s from Amazon. I did.

One thought on “The Surf Punks Changed My Life”