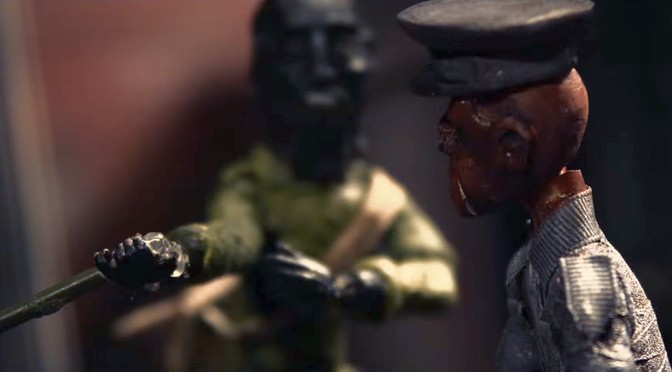 Video: At The Drive In – “Call Broken Arrow”

At The Drive In - Call Broken Arrow (Official Music Video)

From in•ter a•li•a, out now on Rise Records.

I’ve gotta admit I still hold a grudge at this band for breaking up and bankrupting Grand Royal. But that was a long time ago and maybe it’s time to get over it. Maybe not though.

At The Drive In is playing Riot Fest at 7:40 PM on Saturday, September 16.

At The Drive In: web, twitter, amazon, apple, spotify, wiki.

New music from the ashes of ATDI

At The Drive In reached its apex during the brief reign of Nu Metal in the hearts and minds of backyard wrestlers everywhere. But the car-crushing quintent from El Paso, Texas never fully unleashed its hydraulic screech upon the masses, dissolving just as their bus was crashing through front rooms everywhere. It might have been for the best. ATDI could crush the listener with its post-hardcore fusillade, like loud rockers should. But it might have been a bit too, er, intellectual for the average black-clad Nu Metaler, getting in fist fights behind the Circle K. In the popular sense, many of the bands’ contemporaries were coming out of Sabbath by way of Anthrax and NIN; At The Drive In was built on a punk rock foundation.

Two new bands have been thrown clear from the ATDI wreckage. While Cedric Bixler and Omar Rodriguez have formed The Mars Volta, Paul Hinojos, Tony Hajjar, and Jim Ward have regrouped as Sparta. Patches of At The Drive In appear and disappear within the four songs on Austere, Sparta’s debut EP. But what’s most interesting about the tunes is their channeling of the intelligent hard core sound mined by Fugazi or late, great New Yorkers Quicksand.

Quicksand was amazing. When Slip arrived in 1993, it was surrounded on all sides by grunge and the burgeoning Alternative Nation Babylon. But Quicksand’s music didn’t ride on the backs of The Pixies, Fastbacks, or Melvins. It rocked, for sure. But it rolled in different directions, down avenues that felt more urban than the protean grooves of the Pacific Northwest. Quicksand was assembled out of New York hardcore crews like Youth of Today; Slip‘s punishing dynamics were the antidote to Sixteen Stone.

Which all sets up an eerie parallel. Quicksand existed within a period of time that saw lesser loud rock acts riding the wave that Nirvana’s success had generated. However, after only two albums, Quicksand dissolved, never fully capitalizing on the climate they were in. It’s the same with At The Drive In. While it was certainly a group with more to say than many of its blowhard contemporaries, ATDI’s yeast never rose. But it left behind a legacy of rock – albums and EPs that still crackle with inventiveness and tingling power – which will stay fresh long after Limp Bizkit’s sell-by date.

And now comes Sparta, completing the circle with an EP that co-ops Quicksand’s rhythms into songs with a bit more melody and just a hint of programming to compliment the solid state punch. Like Quicksand main man Walter Schreifels, who has re-emerged with Rival Schools, skewing his earlier work in new, exciting directions, Sparta’s new music feels like a perfect addendum to ATDI. And while The Mars Volta recorded output is hard to come by, word on the street is that it’s mining a more melodic vibe. Even though it’s tough when great bands break down, there can still be a payoff in the music that climbs out.

Jeff, you should check out At the Drive-In. They are a wild bunch from Texas that kick it out Detroit-style. They have a real MC5 attitude and great hair. I don’t know what the Gallaghers are up to these days besides getting divorced. I reckon they’re sitting around listening to Abbey Road, which would be a great influence for their next record if they can’t get off the Beatles’ tips, and who can what with the fab four hitting #1 30 odd years after their demise. Judas Priest that’s a long time. Have you heard “Standing on the Shoulders of Giants?” It came out a little over a year ago I guess. Maybe longer, I don’t recall.