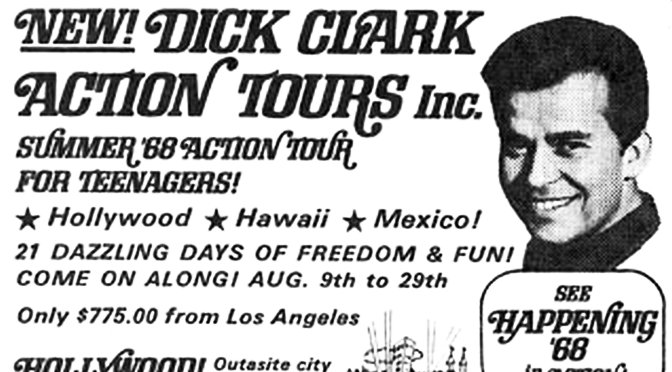 Okay, this is insane. I didn’t totally believe it was real when I saw this old advertisement come across my twitter feed the other day: 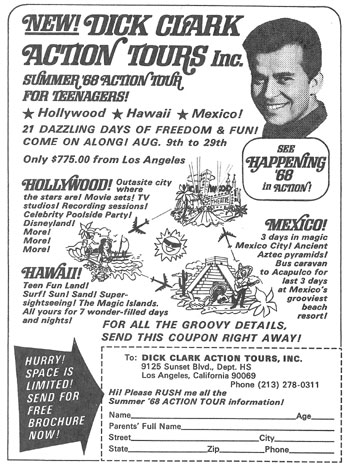 It seems so unbelievable. What parent in their right mind would allow their teenager to go off with a bunch of strangers to Hollywood and Hawaii and Mexico for three weeks? Sure, parenting was considerably more laissez-faire back then, but come on.

As wild as it seems, somebody actually thought this was a good idea. And that someone was Dick Clark, the world’s oldest teenager who would’ve been 38 that summer. “Happening ’68” was a Saturday afternoon music show on ABC TV hosted by Mark Lindsay and Paul Revere of the Raiders. It was apparently popular enough for ABC to create a weekday spin-off (“It’s Happening”) that debuted in July. So it’s no surprise that Dick Clark Productions thought they had their finger on the pulse, so why not extend the brand and cash in? But how could a travel program for teenagers possibly work?

END_OF_DOCUMENT_TOKEN_TO_BE_REPLACED

Just in time for Halloween, Dick Clark raises from the dead to announce he’s returning to host his annual New Years Eve special. He’s only missed one show since he started this wacky countdown in 1972 and that was just weeks after suffering a stroke two years ago. This year Clark will again co-host with Ryan Seacrest, who is vyying for Clark’s title as world’s creepiest old man who thinks he’s a teenager.