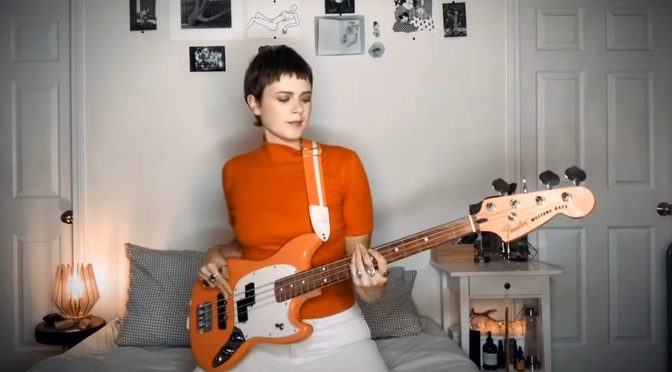 Directed (from home) by Zack Sekuler. Single out now on RCA.

It shows what a dork I am that I know of Winnetka Bowling League as former Regrettes bassist Sage Chavis’ new band, not Hilary Duff’s husband’s band. I didn’t even recognize Duff in her cameo in this video until after I read that it was her. I was just happy to see Chavis working the bass again.

Sage was the Michael Anthony secret weapon in the Regrettes, her backing vocals and muscular bass giving the band an extra somethin-somethin that’s been missing since she’s been gone. Her charisma shines through in the “Kangaroo” video although she doesn’t play on the recording since she “just started playing bass with us and we’ve only had one rehearsal,” Matthew Koma told Percolator. “So this is sort of the first time we’re playing as a band.”

Koma has written songs for Carly Rae Jepsen, Kelly Clarkson, and Shania Twain so the guy is no slouch even if his lyrics are self-deprecating.

I’ve got a bathtub the shape of a swimming pool
A drum set and a Tele that stays in tune
A wife who’s got a better job
She backs me and my indie rock
I’m kidding ‘bout the indie part, I ain’t that cool
But I’m so happy.

Koma says, “‘Kangaroo’ is a song about being okay with yourself. There’s a freedom that comes with no longer allowing the fear of how people see you influence how you see yourself. Also, there’s a descending bridge section that rips off ‘Born To Run’ and lands into some self-indulgent section I wrote after seeing an ELO concert.”

Good for him. It’s probably relatively easy to be okay with yourself when you’re married to a movie star and you own the publishing on a bunch of hits. Still, the sentiment is good. We’re all right where we’re supposed to be.