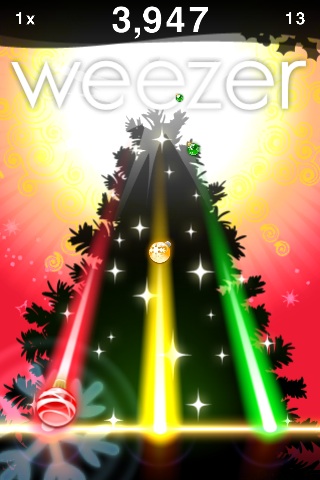 As if Weezer fans need to get any nerdier.

Weezer and the programmers of popular iPhone application Tap Tap Revenge have teamed up to create “Christmas With Weezer” featuring six Christmas classics recorded exclusively for the game (“Oh Come All Ye Faithful”, “First Noel”, “Hark The Herald Angel Sings”, “O Holy Night”, “Silent Night”, “We Wish You a Merry Christmas”) and two bonus tracks (“Pork And Beans”, “The Greatest Man That Ever Lived”). Players “tap and shake their devices to the tunes of the music” in the iPhone equivalent of Guitar Hero/Rock Band.

“Christmas with Weezer” will be available for $4.99 in “a couple of days.” More Weezer news at Karl’s Corner.

Christmas With Weezer: Six Exclusive Weezer Christmas Songs For iPhone and iPod touch from the Makers of Tap Tap Revenge

Los Angeles, CA., – December 4, 2008 – Weezer, one of the most original and beloved bands around, and Tapulous, the leading iPhone applications developer, today announced Christmas With Weezer, an original game for the iPhone and iPod touch that will go on sale within the next few days. Featuring new music by Weezer, the game takes full advantage of the innovative Multi-Touch capabilities and accelerometer as players tap and shake their phones to the tunes of six classic Christmas songs covered by Weezer.

“The guys here at Tapulous all love Weezer so we’re delighted to offer this game on the Apple App Store just in time for the holidays,” said Bart Decrem, Tapulous CEO. “Today’s announcement underscores how artists and record labels are realizing the value of this new platform for distributing music to fans on the most exciting mobile devices on the planet.”

“I agreed to do these special recordings for the game because I am a fan of each of the songs. The melody and vocal lines are incredible and it was fun to sing them,” added Weezer frontman Rivers Cuomo.

Christmas With Weezer is built on the powerful next-generation engine of Tap Tap Revenge, the popular music game for iPhone and iPod touch, where users tap and shake their devices to the tunes of the music, but with rich new features and a fun, family-friendly look to fit the holiday spirit. The music is funky but authentic, since Weezer kept the original lyrics in these favorite Christmas songs. Weezer fans can hear the band performing six Christmas classics, including “We Wish You A Merry Christmas”, “Silent Night”, “O Holy Night”, “First Noel”, “Hark The Herald Angels Sing” and “O Come, All Ye Faithful”, along with two bonus tracks. The six Christmas cover tracks were recorded exclusively for this game, and are not available anywhere else.

“I love my iPhone and all the apps that you can download,” said Weezer drummer Pat Wilson. “I love that our band is the first to actually record songs specifically for an app and Tap Tap Revenge seemed like the perfect one. I am excited to tap along to what we recorded and hope it brings holiday cheer to all kinds of different thumbs and fingers.”

Weezer recently finished up a hugely successful and critically acclaimed North American tour in support of their sixth album Weezer (often referred as the Red Album). The band’s third eponymous album which the Chicago Sun Times lauded as “some of the most intricate songwriting, since the band’s debut album,” has spawned the number one alternative radio hit “Pork and Beans” and “Troublemaker” which was number two at that format.

Christmas With Weezer will be available worldwide for $4.99 from Apple’s App Store on iPhone and iPod touch or at www.itunes.com/appstore/ in the next few days.