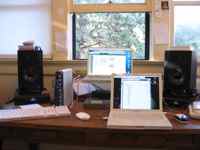 GLONO: I hear that you’re almost done with the archiving process.

LC: Sorta. Keep finding odds and ends. What’s most amazing is that the flow of data and tapes coming in never seems to cease. I tried to “wrap up” most of the cataloging in mid-December [2008], but I keep finding more sources of missing tapes and “leaked” audio. Conversations with friends will bring up someone’s name, and a little research will find some tapes. It’s sort of crazy! I feel lucky to be in a position where I know his family, friends, collaborators, roommates, lovers, etc. Many people have been forthcoming with material, which is very nice.

GLONO: It’s been two years since New Moon was completed.

GLONO: How much of your time has been spent since then on the archiving process?

LC: Probably around 600 hours of pure “hard work” from me, plus my studio manager and the transfer place (Mr. Toad’s) spent a lot of time on projects. The problem with a job like this is you never stop thinking about it during the day!

GLONO: How many total hours of music have you digitized since you started?

LC: There’s 64.8 hours of music for reference in a special iTunes session. But these are just the songs that bear listening, released songs as well, plus concerts, etc. What’s not in this collection are unfinished takes and odds and ends that don’t really bear repeated listening, research or possible release – probably about 1/3 more material… The main backup drive is a 2 TB RAID array. It has over 1 TB of (mostly audio) data on it as of now. All audio has been digitized or transferred and is on this drive. The reels, tapes, etc. are stored in a data storage facility near Portland, OR, and are quite safe!

GLONO: Are you archiving live recordings or just studio stuff?

LC: We’re archiving concerts as well as studio recordings, and let me tell you that is some tedious work. I basically haven’t asked many people for this sort of material unless it is CD-quality (AIFF 44.1 kHz/16-bit) and of decent sound quality. There are some really poor sounding “bootlegs” out there – and I don’t feel it’s worth his parent’s money to pursue cataloging every single one. That said, there are some really decent quality recordings from some shows. And when Elliott had a good show he was really captivating, even on tape.

GLONO: In your opinion, have you uncovered enough stuff to release another album?

LC: I don’t think there is a collection of unreleased material owned by the family that is as strong and unique as what we did with “New Moon” or as semi-obvious/already in motion as “From a Basement on the Hill”. There are a lot of interesting alternate and live versions of songs though. I could see doing “bonus disc” versions of the proper albums as a possibility. Obviously I can suggest such ideas to his parents, but it’s not down to me to decide by any means.

GLONO: Could you describe what material is owned by the Estate of Elliott Smith and what is owned by Dreamworks/UMG?

LC: Everything solo recorded before Jan 1998, plus the contents of “From a Basement on the Hill”, are owned by his parents (the Estate is actually defunct now). Interscope owns all studio and live recording from Jan 1998 to his passing, except for the songs on “From a Basement on the Hill”. There’s also the Heatmiser material, which Tony Lash, Neil Gust, and Elliott’s parents technically own together, though Frontier, Cavity Search and Virgin Records own some of the albums (I think). Plus there’s the high school recordings, Stranger Than Fiction/A Murder of Crows, which I would mostly assume are property of Garrick Duckler, Elliott’s folks, and possibly other collaborators.

GLONO: What have you learned about Elliott Smith during this process that you didn’t know before?

LC: I was surprised at the amount of recycling of musical ideas. I found songs recorded in High School reworked 15 years on. Lyrics became more important to him as he became older, and more time was spent working on them. I really feel I learned, more than I ever thought before, that Elliott was a very major talent and very talented songwriter – both with music and with words.

GLONO: One of the interesting things on New Moon was the early version of “Miss Misery.” You can really see how much he worked on them. E.g., “it’s a comedy of errors, you see / it’s about taking a fall” is so much better than “it’s a comedy from the 70s / with a lead no one recalls.” The earlier version is so explicit and clear that there’s no mystery, whereas the finished version has a perfect vibe without coming out and telling you anything too specific — it’s all mood and feeling.

LC: When I recorded “Miss Misery” with him I had no idea there was an earlier version and how much lyrics had changed. In fact, we did the music and then later when he was back in Portland we did the vocals. So he must have needed more time to write.

GLONO: Is there anything you’ve discovered over the past two years that would’ve changed decisions you made when compiling New Moon had you known about them then?

LC: I was able to hear many more reels AFTER we compiled “New Moon”, and luckily that album didn’t miss too many possible tracks. I’ve found a few that I would have loved to include, but I really wasn’t alloted enough time to find all those tracks. I’m glad we found what we did! I think the 24 tracks was enough. Maybe someday we’ll add a bonus disc to “New Moon”! Ha ha.

GLONO: Any changes to the technical side?

LC: Well, we had Mr. Toad’s do a few analog to digital transfers of “troublesome” reels (tape shed, formats I didn’t have) during the research, sorting and mixing of “New Moon”. But most songs were played back off of Chris Walla’s 1/2″ 8-track deck. Later, Mr. Toad’s bought a new 1/2″ headstack and with their better electronics we started the actual transfers for the Archive project (“New Moon” sort of preceded the main body of Archive work) and these new transfers sounded much better than Chris [Walla]’s tape deck (sorry Chris). I could do better mixes, but that’s a few years too late!

GLONO: Can you hear a difference?

LC: Yeah, I think I can hear a difference, but I haven’t made new mixes and compared them.

GLONO: Do you think an average music fan listening to a CD on consumer speakers could hear the difference?

GLONO: What’s up with that unreleased song that was supposed to appear on a charity compilation?

LC: Live From Nowhere Near You, Vol. II by Kevin Moyer. I found it on a DAT tape while finishing “New Moon” mixes. It really seemed out of place for the time, during the recording of “Either/Or”, so I asked Tony Lash and Neil Gust if it was a Heatmiser track. They’d never heard it. I kept wondering where this song had come from. While cataloging the tape transfers I found the multitracks of the song – the drums and basic instruments had been tracked on one tape and then mixed to DAT and dumped to a new reel and more overdubs performed. I was able to collect all the tracks and line them up in Pro Tools and build a new mix. The original DAT mix Elliott did was very rough and the new mix is much more enjoyable, I think. So, as I was finishing up the bulk of the cataloging in Dec 2008, I was able to find copies of the cassettes by Elliott’s high school group, Stranger Than Fiction. It turns out this song had been co-written with his pal Garrick Duckler from STF, and recorded by their band back then. That explained why the song seemed like such an anomaly! I hope it comes out soon. It’s quite different and kinda fun.

GLONO: Aside from the one song on “Live From Nowhere Near You, Vol. II,” how many (if any) unreleased studio songs have you found? I’m talking about more or less finished ones with lyrics. Not alt versions, etc. But New Moon-quality unreleased songs?

LC: More than people would expect. But many are owned by Interscope.

GLONO: Do you think there’s anything that fans can do to encourage Interscope to release that stuff? Or license it to another label? 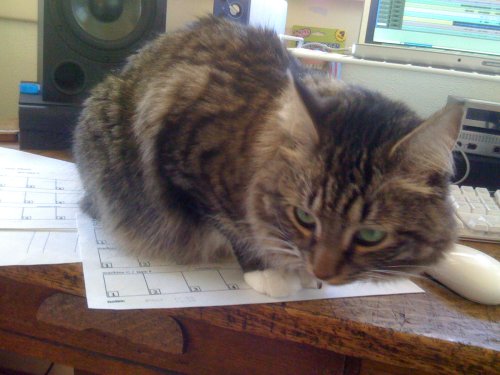 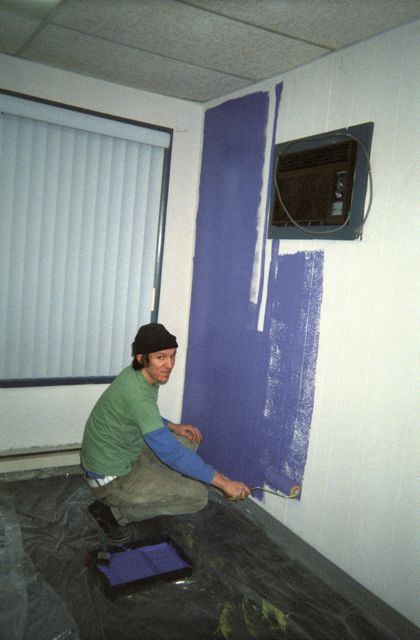 • Elliott Smith – “Between the Bars” from either/or

• Elliott Smith – “Angel in the Snow” from New Moon

• Elliott Smith – “Twilight” from From a Basement on a Hill

• Elliott Smith – “Memory Lane” from From a Basement on a Hill

Video: Elliott Smith in the studio at Capitol