It started with someone whose taste in music I respected. She was the music director at Iowa’s largest public radio station, responsible for maintaining their vast record library. She also hosted the early evening music slot, a collage of folk, blues, and world beat programming that occasionally tiptoed around the perennial favorites of college rock. I hosted the show immediately following hers and she would spend a few passing moments before she left for the night to talk about music and drop some hints on records she thought were worthy of airplay.

“Have you heard the new Jandek album?” She asked me.

“No,” I informed her, not letting her know that I had no idea who the fuck Jandek was. “Why…is it good?” hoping to gauge her level of enthusiasm.

“It’s fucking great,” she stated without hesitation, adding a bit of profanity for emphasis. “I love Jandek,” she added, for no other reason than to coyly suggest that I should really play a track from this “fucking great” album on my show that evening.

I’m not one to take an enthusiastic recommendation lightly, and from the moment she left, I went straight for the station’s large current record file and sought out the artist and record she assuredly praised.

You Walk Alone looked very similar to the endless homemade records the station received from local artists who hoped that we would use some of the publically funded airwaves to play their music. We did, via a weekly show that provided a spotlight on regional bands called “Down On The Corner,” and on first listen, You Walk Alone rivaled some of those local attempts at recorded history.

It possessed a modicum of fidelity and the cover—in typical Jandek fashion—was strangely bland to the point where I went back into the library and gathered all the Jandek albums I could find.

As it turned out, You Walk Alone may have been the best thing in his catalog. It featured a band, one in which the guitar player seemed to be playing actual notes and one in which the songs themselves seemed to have a traditional structure to them. The rest of the catalog featured Jandek playing open, atonal guitar chords—mostly out of tune—all recorded poorly while the man attempted to sing bits of freshmen poetry and/or stream of consciousness lyrics. It was awful. It was so bad that I actively sought out the music director the next day just so that I could tell her what I thought of this Jandek guy.

At first, I was rattled by her smile. Could it have been that she intentionally led me down a path of Jandek knowing that it was some of the worst music known to man? Was it her mission to have me waste my time with it, a cruel retribution to get back at the fact that she herself wasted her time with the subject? Maybe it was a test of my own pretentiousness, to see how far I would admit to liking something when it was so utterly obvious that the record was utter shit. All of these things fell aside when she reiterated, “Jandek is awesome,” leading me to consider that the pretentiousness may reside on her part.

Years later, I came across a quote by Kurt Cobain, which addressed that very topic: “He’s not pretentious, but only pretentious people like his music.” There’s no better explanation for Jandek fans, but it falls short in describing what his intentions really are. It is understood that the story of Jandek is more intriguing than the artist himself. The more you read about his reclusive nature and consider the possibilities as to why he records music in the first place, the more you’re drawn to him. I followed every article I could, and with each unanswered question, there was a part of me that wanted his music to be better. It’s so much easier to like an enigma when there’s a worthy characteristic or talent to their endeavor. The weirdness of Syd Barrett‘s chord structures and whimsical lyrics appeals to me. The finality and isolationism of Alexander Spence‘s Oar puts it as one of my favorite albums. There is nothing—aside from a few moments on You Walk Alone and “Cathy Sings,” a song from Chair Beside A Window that Jandek doesn’t even sing—that would stir my passion to the point where I want to pursue his recorded output. It is music that is created for one person—Jandek himself—and the fact that there is a contingency of people who identify themselves as Jandek fans is a bit misleading. If the artist’s passions are so pointedly internal, then what is the motivation of those that claim to follow him? It comes down to aligning one’s self with the story, thereby allowing the “fan” to have an audience with each spin of the recording so that they perpetuate the myth of Jandek. The other notion is that the fan—the one that claim to actually enjoy his work—is so completely wrapped up in the story that they’ve actually conditioned themselves to believe that they like it. It’s unlikely that anyone could truly enjoy Jandek; the pleasure comes from admitting to someone else that you do. 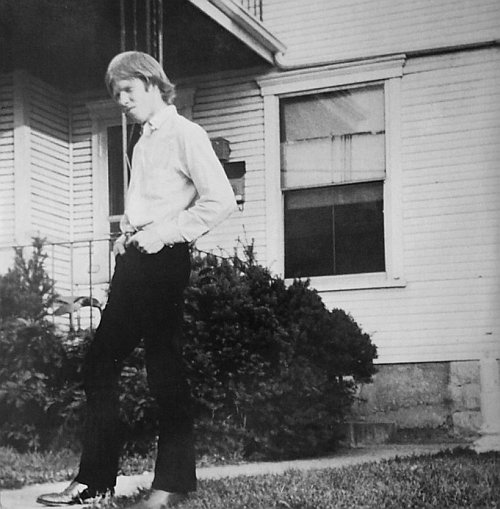 I’ve now had over twenty years to learn, study, and digest the myth of Jandek—more than enough time to formulate an opinion and revisit it just to be certain—I put Jandek On Corwood into my Netflix queue to bring some finality to my own opinion. The resurgence came from Jandek’s decision to start performing. What began as a “Holy shit. I think we just saw Jandek perform live…” from a ’04 surprise gig in Scotland to a full-fledged tour, we’ve witnessed the transformation of an artist whose notoriety was his anonymity to one with little reason to examine further. With each live performance, the myth is diminished, leaving behind a guy from Texas with no real musical talent who took a bunch of conceited record geeks for a three-decade ride.

With so little to offer in terms of musicality, and with increased opportunities to see Jandek (assuming there will be more), it’s logical to ask, “Why would you want to?” To see his performance would most certainly be the finality of a quarter-century of myth making.

As for Jandek On Corwood, its ninety minutes devoted to perpetuating the story while doing little to explain the musical aspect of Corwood Industry‘s only recording artist. You get about a dozen experts that wax on about Jandek’s state of mind, his motivation, and interpretations of his massive recorded output. Occasionally, one will admit to how unlistenable his music is, before suggesting that it’s all part of appeal. It would have been more intriguing to hear them confess that the story is the appeal and how his music is not even worth examining.

Essentially, you get a film that mirrors Jandek himself. The filmmakers coyly weave a thin web of interest, playing portions of the man’s catalog over a moderately entertaining narrative. Towards the end of the movie, you begin to lose interest. From the ridiculously over-analyzing “experts,” to the increasingly intolerable soundtrack, I began contemplating the next film in my Netflix queue. At that moment, they introduce the Rosetta Stone of everything Jandek: the 1985 phone interview that John Trubee did with the Rep for Spin magazine. The recording proves to be both the first and last word on everything one needs to know about the artist. Sterling Richard Smith (a/k/a Jandek himself) recounts the story of Jandek, admitting how a positive review in OPtion magazine prompted him to turn a therapeutic hobby into a full-fledged cottage industry. The intrigue lies in what he refuses to say—the long pauses in his replies—typically involving the other performers or the motivation of his muse. Both topics would be worthy of anyone’s silence, and for a guy that was selling under 100 copies of each release, it’s easy to understand why he would want to prevent a powder keg of interest that an article in Spin magazine would provide.

Of course, the article fueled the interest of a few brave souls who’d have been better served by stories on the amateur musicians who reside in their own hometown. But since Jandek was featured in Spin and the local cover-band guitar player wasn’t, it became a very trendy thing to claim, “I like Jandek.”

Regarding his more recent material, the albums that are a cappella, it’s almost like Jandek was attempting to create something that would finally cause people to resent him to the point of ignoring him. They are the ultimate declarations of “fuck you,” beyond unlistenable and about as environmentally friendly as a Styrofoam cup. And when even those albums failed to alienate the few dozen supporters, Mr. Smith began to use his 30 year legacy into a sweet little retirement plan.

Now we have a man who’s able to do a few weeks of sight-seeing each year at our expense while managing to chip away at the notoriety with each encounter. I don’t blame him, in fact I envy it: who wouldn’t want to have their travels funded just by playing a few hours of poorly executed songs in front of a few hundred people with a backing band that needs little to no rehearsal time to prepare?

At the same time, it’s been long overdue to have a candid admission on the true artistic merit of Jandek. For me, it’s taken a few decades to consider that his oeuvre is nothing more than a bunch of self-indulgent bullshit, and to begin to question the logic of his fans. I consider one of rock and roll’s more reliable litmus tests is “How honest is the artist and their music?” On both accounts, Jandek fails, and because of that, I question how honest his fans are being with themselves.

36 thoughts on “The End Of It All: Acknowledging The Awfulness Of Jandek”