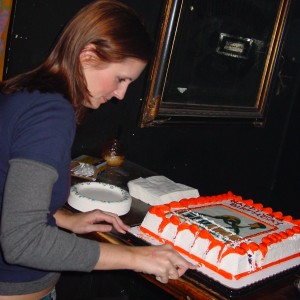 One year ago for our tenth anniversary, we took a little break. A sabbatical. After six months with nary a peep, we quietly started publishing stuff again. And we’ve been posting stuff fairly regularly since then.

The break was nice. It gave us time to migrate from MovableType to WordPress. We also switched hosts from Hostrocket to Dreamhost. And then switch back to Hostrocket after Dreamhost couldn’t power our decade-worth of content with their measly 8MB of PHP memory.

Our break also gave us some time to think about why we do this whole Glorious Noise thing and whether or not to continue on with it. When it comes down to it I realized that I enjoy sharing good music, interesting news, and critical opinions with the people who read this site. It’s easy to get bummed out when comments are non-existent, when pageviews are low (or are only high for stupid stuff), and when ad revenue dries up.

But then I think back eleven years to when we started this thing and we didn’t have any of that business. (Remember when enabling comments on blogs required separate software? BlogVoices, RIP!) Then again, we don’t have the novelty factor anymore. Plus now most of us have kids, real careers, etc. But we still care about music, musicians, and the music industry so we’re going to keep this going for the foreseeable future. As long as it’s fun.

I’m excited about Sab’s new column, My Vinyl Solution, where he’ll be listening to his entire record collection in (more or less) alphabetical order. We’ll be rolling out a redesign over the next couple of weeks. And we’ll try to come up with some other fun ideas to keep this interesting to our readers and to ourselves.

I’m off to drive to Chicago to see Jeff Mangum right now, so I’m signing off. But I’ll leave you with some inspirational thoughts from Ice Cube, Dr. Dre, and MC Ren.