Gil’s Café in Milwaukee was a near-perfect setting for his “secret” (the only advertising we ever found was through Pollstar and Bird’s website), sold-out show on March 11. Gil’s later added a second show on March 12, which also quickly sold out. Gil’s itself is all wooden floors and lighting in hushed red tones—perfect for a wandering singer-songwriter with a virtuoso talent for the violin. Yet I couldn’t shake the creepy dinner-theater vibe—there was a woman in a fur coat sitting several feet away who ordered some sort of appetizer in the middle of the set and there were extremely attentive black-clad waitresses skulking around taking drink orders—something that would have been great if we were, in fact, there for dinner but DUDE LADY MOVE YOUR GODDAMN HEAD I AM TRYING TO SEE.

I had some preconceived notions going into the show about the ratio of men to women present. While the crowd was pretty evenly mixed, Bird’s effect on women was laughably apparent—one girl in the front row tremulously handed him flowers as he was setting up his equipment. By the end of the set, though, we realized the reason we had fallen under his spell had less to do with the physical package and everything to do with his stage presence. After an enthusiastic introduction from the titular Gil and a false start, where we were told shyly to “enjoy ourselves” while he fixed some last-minute glitches in his equipment, we were instantly transformed into the most rapt of audiences.

Andrew Bird plays the violin like he is fighting with it for control over his own body. He whistles like someone from a sci-fi movie, plays guitar ferociously with his violin strapped to his back, and sings like his life absolutely depends on it and needs to convince you that yours does, too. He tends to point emphatically at the air while he’s singing like the weird kid in your debate class who knew everything there was to know about Chomsky. There are trace elements of Rufus Wainwright and Jeff Buckley in his voice, range and stage presence, but not to the point where he can be easily dismissed as “the new Buckley/Wainwright/Dylan/Insert Singer-Songwriter Here.” 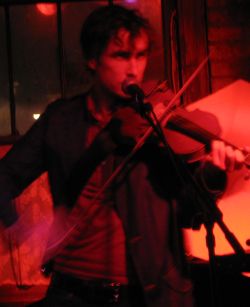 The set, which lasted nearly two hours, included mostly songs from Mysterious Production. Bird opined at the beginning of “A Nervous Tic Motion Of The Head To The Left” (mp3) that “everyone should get a nervous tic. It helps you handle things.” Other highlights included a gorgeous rendition of “Fake Palindromes” (which he explained was both about writing fake palindromes to keep himself awake while on a long drive and the actual practice of trepanation), and “Lull” off Weather Systems. He received a standing ovation at the end of the night, which fit perfectly with the overall feeling that he’s something of an anachronism, that they just don’t make people like this anymore. The stage was so tiny that there was nowhere for him to actually move while he was waiting to come back for the encore, so he hid rather befuddledly and charmingly behind a speaker. After he came back out he addressed the audience: “That was awkward.” He then threw himself into the remaining three songs—an unnamed gospel song, the aforementioned “Lull,” and an aching, spare “The Happy Birthday Song.”

A few songs off of Mysterious Production concern themselves in an abstract, metaphorical sense with what the person he is singing to is chemically composed of. Andrew Bird is not entirely of this world, not quite. Yet he is firmly entrenched in its conventions and trials, and his music both contains and transcends earth.

9 thoughts on “Andrew Bird: The Stuff of Dreams Sung by Dreamy People”