The Last Shadow Puppets – The Age of the Understatement (Domino)

The Last Shadow Puppets are Alex Turner from Arctic Monkeys and Miles Kane from The Rascals. You likely know the former and if you’re a die-hard anglophile (or bona fide member of the British Empire), you probably know the latter. A few years ago, Turner raced to fame with a band that was mostly discovered by fans on a Libertines-focused message board and driven by the catchy stutter of their single “I Bet You Look Good on the Dance Floor.”

The Arctic Monkeys touched a nerve with story-songs that painted vivid scenes of urban blight and teenage angst against the backdrop of a Britain in decline. The fact that American kids dug it just proves how goddamned catchy the songs really are.

But, as we’ve heard from pop stars for decades now, quick fame and searing fan devotion can be confining as your legions demand more and more from you and divergences are allowed less and less. Some, like Kurt Cobain, check out. Other, like Bon Jovi, oblige. Still others simply change their skins and take on new identities. Alex Turner is no Cobain nor is he Jon Bon Jovi (God, I hope that line turns up in Google searches).

The Last Shadow Puppets can be easily dismissed as a one-off side project, but what do you do if the side project outshines the day job? Jack White is hoping to find out, but Turner is in the thick of it. While the Arctic Monkeys is solid with excitement and lyrical brilliance, The Last Shadow Puppets is rife with drama. Sure, there’s a fair amount of melodrama with the swells of strings and the spaghetti-western-style guitars, but the real meat of that sauce is in the songs.

The title track is pumped full of flashy language and brave production. It actually is like a spaghetti western with tough talk of a dangerous gal who lures in suitors only to break them in half:

You can almost see the grainy images walking through the dust as smoke rises in the distance.

Most reviewers reference early Scott Walker in regards to the orchestration, but I would present Serge Gainsbourg and even more importantly Lee Hazlewood, the longtime collaborator of a certain Boot Walking Sinatra. You want to talk about musky drama, the Haze knew how to frame a song in swells and reedy passages that carried the listener along as his muse lilted through often nonsensical lyrics and breathless melodies. Yes, Lee Hazlewood imbued his songs with English Leather, so it’s appropriate that two Englishmen would revive his legacy with the songs and the production worthy of his moniker.

Some fans of their full-time bands may smirk at the lushness of the sound, but only a tasteless dolt would miss the excitement and energy of this album, and given the notorious punch-ups that often break out at Arctic Monkeys’ shows, maybe we should expect as much. And maybe there ain’t room enough in this town for the two of us.

Video: The Last Shadow Puppets – “The Age Of The Understatement”

And because the album cover is so fantastic, here it is in higher resolution: 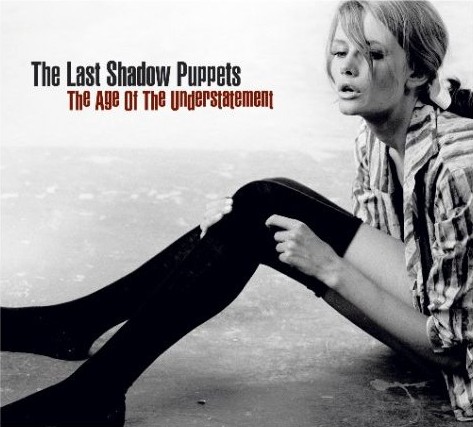 The photo is by Sam Haskins, from his 1962 collection, Five Girls, which is sadly out of print. Haskins posts on his blog, “Gill was an art student in Johannesburg in the early sixties. Not a professional model, she just walked into the studio one day and was a total natural in front of the camera.” He’s also posted a couple more photos of Gill.