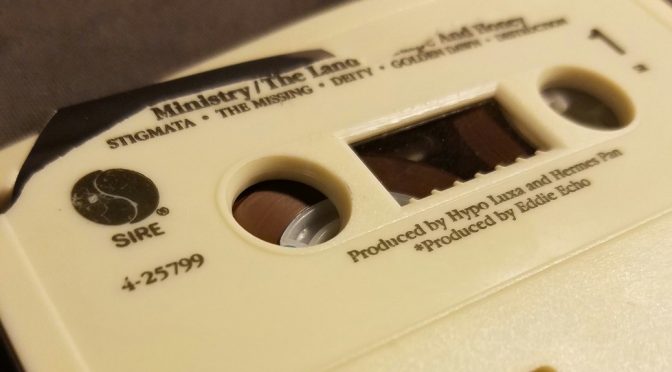 What was once angry might once again inspire volume

It was a few days after the election when I found nihilism lying broken in the street. Scuffed, half-crushed, and sharing a gutter with chicken bones and an energy drink that didn’t take, it still had spittle in its beard, metal shavings in its throat, and gave off the vibe of not having removed its leathers for a decent spell. And by the way, ‘you party?

Ministry’s Land of Rape and Honey was in the gutter at the bus stop. A half dead cassette, still broadcasting to Past Me. The iconic Sire Records logo was apparent on its banged up, off-white housing, next to all of those rabid, reverse paeans to a god called Fuck You. “Stigmata,” “The Missing,” “Deity,” “Golden Dawn,” “Destruction”. Electric guitar and bass, arc welded to unholy electronics.

Released in 1988, Land of Rape and Honey continued Al Jourgensen and Ministry’s evolution from a largely electronic, but definitely weird dance act into something much more angry, and louder. Today we talk a lot about dumpster fires, right? This music was abraded in flames, reflecting in a million jagged shards of the devil’s disco ball. In Hell, no one can hear you party, and that’s mostly because of Jourgensen’s mechanized yowl. Mr. Acidic Robot Sarcasm, he was pretty much over the putrid mud from the sky, the shit storm of propaganda. It was time to scream obscenities at the Conservative Establishment. Oh, and society? You’re a bunch of boring-sex-havers. The title track even hijacked the bashy 1985 slink of Robert Palmer’s “Addicted to Love” and applied skeezy synths and shouty polemic at maximum volume. You climb the mountain, you pray.

Past Me reveled in the pounding dystopian echoes of “Destruction,” how the martial beat and its bizarro hardcore punk churn resonated in my head. At a different bus stop, I cut its music video out of footage from the 1987 Patrick Swayze headband vehicle Steel Dawn. Back then I knew Reagan, Bush, and their cronies were schmoes, but I mostly wanted to max the volume on my Walkman in private solidarity with some scary people from the city who didn’t give a fuck about God, The Guv, or giving license to complacency. (Play it louder, blasted tape technology!) Land of Rape and Honey sounded like a middle finger built from amps stacked to the sky. And the sky could suck it, too.

Post-election, Current Trump, happening upon a bracing screed from my own past, I wondered how artists in the now will agitate the status quo. I fished out the remains of the tape, and said goodbye to the gutter. Our bus had arrived. We would make it in time.

Video: Ministry -- “The Land Of Rape And Honey”

Ministry - The Land Of Rape And Honey (Video Version)