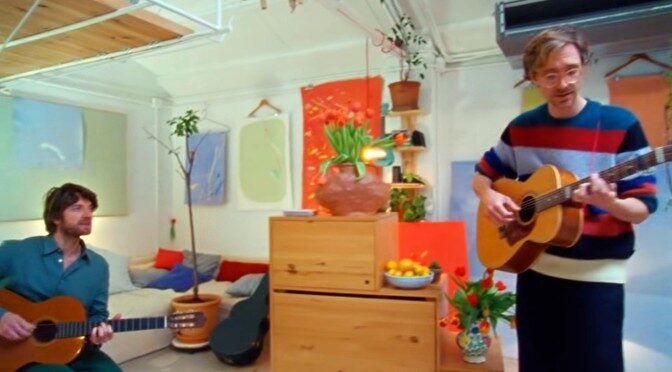 Back in the Great Sellout Wars of the early 2000s, the Kings of Convenience were one of the bands I would bring up to demonstrate that a television commercial could indeed turn someone on to good music. Their song “Toxic Girl” was used in an ad for something or other where a young person was on a bus, longing for someone. That’s all I remember now. I just spent about five minutes trying to find the spot online but failed.

The way it worked back then was we would hear a cool song, search the internet for who it was, and then download a 128mbps MP3 via Napster or Audiogalaxy. Later, when we stumbled across the cd in the used bin, we’d buy it for six bucks, and if we really liked the whole thing, we’d be sure to pick up their next album on release day. If the band ever toured we’d go see them, and if they had cool merch we might even get a shirt.

It seems naïve now, but at the time we believed that filesharing would ultimately lead to more revenue for musicians. And maybe it did for a while there when people (like us) still bought physical media. Streaming obliterated this system. But that’s another story.

Back when Kings Of Convenience released their last album, 2009’s Declaration of Dependence, there was no streaming. “Album downloads” were still a big thing that was on the rise. It’s a different world now, but you wouldn’t know it from listening to their new single. It’s got that same breezy grooviness that first caught my ear when I saw the ad with the kid on the bus. It’s not really bossa nova but you can imagine a Getz/Gilberto cover of any of their songs, including this new one.

The video features a single, continuous shot of the duo and some friends hanging out in an extremely Scandinavian apartment. Totally on brand and wonderful. Made me realize how much I’ve missed these guys. Let’s say we give them one more time, one last chance to speak again…