Watch the Short Film on DPT’s Day in Chicago

GloNo Video: Dirty Pretty Things "A Day in Chicago, A Night at Schubas"

Those two former members, Carl Barat and Gary Powell, are clearly trying to move forward. Sure, maybe the emotional tension (and some might suggest sexual tension) and personal drama of the Libertines may be gone now that Carl’s no longer sharing the mic with Pete Doherty, but make no mistake that this is a shit hot band who exists much more as a gang than a duo. And Gary in particular seems happier with the chemistry of this group over that of the Libertines, which often drew the media’s attention too close to Carl and Pete’s relationship and too far away from the music and the ideals of the band.

Most writers of articles that even mention the members of the Libertines can’t help but mention the drugs and the burglaries and the dumping and Kate Moss, but none of that shit matters. What was important was that the Libertines were the most exciting British band in 15 years and that was due to the music they wrote and the scorching live shows they performed—and yes, the personal tension between the members, which is 100% rock and roll. Dirty Pretty Things have two thirds of that equation down and seem to be happy fattening those bits up to make up for the missing last.

As we drove around Chicago before the band’s soundcheck, Barat asked about the size of the venue they’d play later that night. It was a good question because for the life of me I could not figure out why a band with this much associated history and buzz would play the excellent, but incredibly small Schubas.

“I think its capacity is around 200,” I told him as we crawled through rush hour Chicago traffic.

“What?” he answered and then turned to Rossomondo. “How big was last night?”

Slim’s in San Francisco posts a capacity of 470. The show following Chicago had Dirty Pretty Things playing Great Scott to a whopping 240 people, which was that club’s capacity. (Edited for accuracy--ed.) Two nights in a row of a very limited date tour saw the band playing to fewer than 300 people. I don’t know if it was some stroke of marketing chicanery to ensure the band “sold out” it’s first US tour or if somebody in the their camp didn’t quite have the knackers to book them into proper venues, but whatever…

On stage, Rossomondo employs that shock of curls as a sort of metronome. He bobs and leans with the chunky rhythms and blistering backbeat of the music and seems to always teeter on the edge of falling down. He’s one of the two pillars that frame Barat, the other being ex-Cooper Temple Clause member Didz Hammond, who Barat swears was NOT poached from the Clause. Just the same, Hammond’s style seems more at home in the neo-punk stutter of DPT than the trippy hum of Copper Temple.

The crowd at Schubas was maybe the loudest I’ve ever heard in that venue with shrieks and screams blanketing the tiny room from the moment the band took the stage. The silhouette of the crowd pulsated in unison to the whoops and bounce of “Deadwood,” which kicks off the band’s debut album Waterloo to Anywhere. Things got loose with the cheeky “If You Love a Woman” and went completely insane with a set closing nod to the Libertines and “Death on the Stairs” and “I Get Along.” By the time it was all over most of us were half deaf and fully drunk and damned glad to have caught the band in a club one-third the size they deserve. Maybe next time we won’t be so lucky. 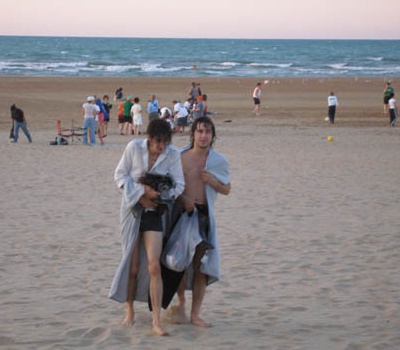 Also, check out our still photos from the day. Previously: What Became of the Likely Lads? from July 2006, “Re: Babyshambles (An Open Letter to Mick Jones)” from April 2006, and “The Libertines: Wet Work” from August 2003.