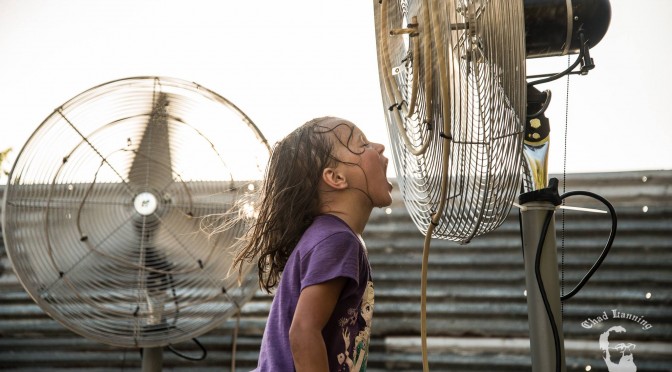 I’m going to tell you something most Oregonians don’t want you to know for fear that it will remove the final barrier that keeps even more people from moving out here: It doesn’t rain out here nearly as much as you probably think it does. In fact, the summers can sometimes be long, dry affairs that leave you praying for rain come September. The temperature will inch up to the triple-digits some days and the western sun feels more intense, but that may be my imagination.

It was over a three-day stretch like this that my family and I again made our way to the West Valley to the small town of Willamina, Oregon. We were in the middle of a welcomed break from a stifling summer when the weather report showed a slight return to the upper 90s. You guessed it: during the three days that covered the Wildwood MusicFest.

We’ve been going to Wildwood since the second year of its existence, only missing the first year because we heard about it after the fact. A large portion of our network of friends out here revolves around a monthly event called the Hoot, which is a loosely organized gathering of friends and musicians and based on Levon Helm’s Midnight Rambles. We all bring a six-pack, a dish to pass and whatever instruments we might play—or at least a love of music. A large contingent of our Hoot Family returned from Wildwood Year One raving that we had “our own festival” and it was then that we put it on our calendar for the next year.

I could give you a play-by-play review of each act and their individual performances, but…actually, I can’t. Wildwood is so much an overall experience, more than a running list of musical sets. While there were certainly musical moments that stood out, they only enhanced what is a carefully curated soundtrack to a community gathering in a beautiful setting. I am sure you can find some commentary on the acts and traditional reviews of their sets, but that’s not my point here.

For those of us who attend festivals regularly there are certain evils (or at least inconveniences) we accept in order to see our favorite artists among friends…and beer gardens. There are ever-rising prices, confusing or non-existent parking, stomach churning porta-johns, a glut of shitheads and dimwits who crowd the stage and talk or slur through every song. Add $4.00 bottles of water, $7.00 Bud Light and $10 slices of pizza and you get the feeling you’ve been had. What’s worse is that all of it is going to corporate event organizers, ticket distributors and global headliners’ management.

There is literally none of that at Wildwood. As they say on their site, “The Wildwood MusicFest was created exclusively by grassroots efforts of a caring community.” And that’s no joke. It’s organized by local creatives, Kim Hamblin and Katie Kendall.  Kim runs the Roshambo Art Farm, where the festival is hosted, and Katie runs the Wildwood Hotel and consults with a small group of friends and muscians on putting together the festival line-up. They both seem to possess boundless energy and creativity, which is focused on the festival every July. The vendors are local and provide food to order at Happy Hour prices. The water, also supplied by a local vendor, is free—always, in any quantity. And while I had to admit to friends before the weekend that I didn’t know more than half of the bands on the bill, every single act delivered. That was true of the local acts and the national touring acts. When’s the last time you could say that about a three-band bill? This was three days.

But having local bands and businesses represented is now becoming expected of most any event. Lollapalooza has had local acts on side stages in the past and even has some local vendor hawking shirts and water bottles alongside AT&T reps who can’t explain why you can’t get cell service on the festival grounds, but are happy to discuss upgrading your data plan. But what’s also different about Wildwood is that as much as they invite the community in, they also reach out:

A portion of the proceeds will be given to several local non profit organizations including our local Willamina FFA chapter, The Friends of Family Farmers, agricultural and music programs through the West Valley Community Campus, Tina Miller Youth Center and our local public schools.  We will also be saving to help create a camp-like program for local selected youth to work one on one with established musicians, although that goal may be some time down the road.

Rather than maximizing their profit, they invest in their community. Because this is where they live and who they live with. “Buy local” is not a bumper sticker for the organizers, volunteers and attendees of Wildwood MusicFest, it’s an ethos. It’s something you can feel throughout the weekend and something you take home with you. It’s something you remember as you mark the date again for next year’s festival and think of hot days, cool nights and great friends.