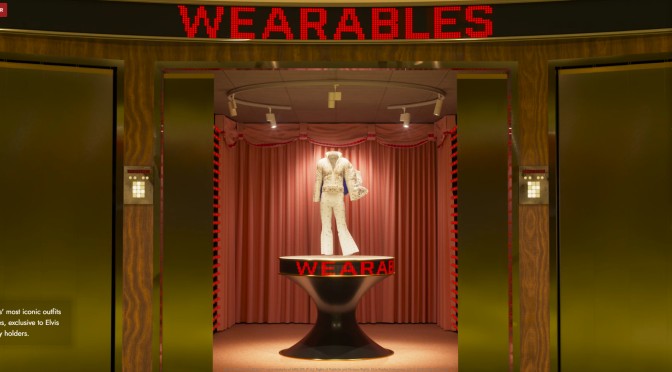 Admittedly, this is a little confusing.

This is the opening paragraph:

The confusion is the clause “the icon’s multi-metaverse NFT project.”

That is, one can only assume that the icon in question is Elvis; Elvis Presley Enterprises, a subset of Authentic Brands Group, is creating more digital Elvis wealth, which will, of course, garner more wealth IRL for the owners of ABG.

Elvis, of course, is dead. Has been (I suppose I should say “Allegedly has been,” because nowadays it seems that facts are only what one wants to make them to be, and while it wasn’t all that long ago that conservatives attacked academics who were ostensibly proponents of post modernism for undermining Superman’s “truth, justice and the American way,” now it is that group who, as we were reminded of by the Select Committee to Investigate the January 6th Attack on the U.S. Capitol, are all about denying reality and do so with bear spray, clubs and Viking outfits; somewhere Superman is weeping) since August 1977. If he is still alive, he’s 87, which is probably past the age that one could reasonably work the drive-thru at a burger place in western Michigan or anywhere else for that matter, the massive number available jobs in the food service industry notwithstanding.

But through the activities of the “dream team,” “fans” will obtain “an all-access pass to the Elvis metaverse, play-to-earn games, Elvis avatars, exclusive wearables and iconic collections procured by the community wallet.”

According to Marc Rosen, President, Entertainment, Authentic Brands Group, owner of Elvis Presley Enterprises and Iconoverse, this is a “huge commemorative year for Elvis with the launch of Warner Bros. Pictures’ epic big screen drama, ELVIS, from filmmaker Baz Luhrmann, catapulting his legacy into the future.”

The odd thing about all this (or perhaps that should be “an odd thing,” as there is certainly more than one unusual thing going on here) is that somehow Elvis former human being is being thought of as some sort of William Gibonesque American Idoru.

Should the pronoun for Elvis now be “it” rather than a masculine form?

Consider this quote from Matty (yes, one name, just like Elvis), who is the founder of The Metakey: “Elvis ‘shook up’ the music industry in the 1950s and it is that sort of cultural impact that we at The Metakey like to champion. I look forward to sharing his historic legacy to our community and introducing him to the Web3 space.”

“Introducing him to the Web3 space”? To put this into some sort of context: in 1977, the Radio Shack TRS-80 desktop computer, unaffectionately known as the “Trash 80” by users everywhere, was introduced. What would “he” think of “the Web3 space”?

At approximately the same time that ABG put out the press release about “the icon’s multi-metaverse NFT project” it sent letters to chapels in Las Vegas (not to be confused with “Vegas City, primary land owner of the largest entertainment district in Decentraland,” which “will be supporting the build of the unique Elvis Block Party experience in the largest and best known social casino in the Metaverse”) where Elvis impersonators perform weddings.

A statement from ABG regarding the letter it sent to those chapel proprietors says, in part, “The estate [which is represented by Elvis Presley Enterprises] has strong relationships with official Elvis tribute artists, fan clubs, and festivals, as well as a robust global network of licensed merchandise partners. There is no intention to shut down chapels that offer Elvis packages in Las Vegas. We are seeking to partner with each of these small businesses to ensure that their use of Elvis’ name, image, and likeness are officially licensed and authorized by the estate, so they can continue their operations.”

In other words, they want to collect, as it might have been put in Las Vegas during the time of Young Elvis, vig from those chapels.

This is reasonable because Elvis Presley Enterprises undoubtedly “owns” the likeness of Elvis, which is why “Decentraland will host The Elvis Block Party, the first Guinness World Record in the metaverse for [the] most Elvis impersonators in one place.”

Those who have glommed on to the “Elvis Genesis Key” will “be gifted officially Elvis Decentraland wearables. The collection will include his iconic jumpsuits, outfits, shoes, wigs and sunglasses.”
In that space Elvis impersonators can do whatever goes on there, presumably.

One of the things that is bizarre (at best) about all this is why Elvis continues to have such cultural resonance. Why would someone want to be married by Elvis? Would they want to have their teeth cleaned by someone in a jumpsuit and sunglasses with a Brylcreemed pompadour?

And who are the people who are interested in the Elvis avatars in the metaverse? In 1993 The Washington Post reported on a survey that had it that “Elvis fans are most often 45 to 55 years old, white and high-income blue-collar workers. Nearly 80 percent are women.” That would mean the youngest of that cohort would now be 74. Are they going to be attending The Elvis Block Party? And if not them, is this something that gets passed down from mother to daughter?