I’ve been to CBGBs plenty of times. Hell, I’ve even played there three times. The place hasn’t been attracting big name bands for years, but since they lost their lease all the bands that cut their teeth at the club have been coming out in droves to show their love and respect for Hilly Krystal and the little club he opened 33 years ago.

Tickets for this last show sold out in 8 minutes on October 1, and I didn’t have one. I figured I’d stay home and listen to the live satellite radio broadcast and enjoy it that way, but this past week as the end came closer I thought I should go and attempt to bullshit my way into the show.

I got to CBGBs on Sunday at five o’clock pm and there were 30 people in line already. Doors were scheduled to open at 8. There were dozens of news trucks, camera crews and press in front of the club. Patti arrived around 6 and everyone broke into applause. I didn’t know she was so tiny. She came out a while later taking photos of the front of the club as the press swarmed around her and she answered their questions. It seemed everyone has a camera these days and wanted their picture taken in front of the club. I did it too.

After a series of events too scurrilous for publication, I made it inside.

I worked my way down to the stage, where it was already crowded with tiny rock girls who hadn’t been born earlier than 1985, but I managed to get in close to the front, with two rows of people in front of me. Luckily no one tall.

Patti took the stage about 10 and the show started quietly with her reciting one of her poems. There were a few false starts of some songs, and she was getting aggravated. Some sound problems, and the band screwed up a couple of song intros so they started them again. Patti introduced Flea from the Red Hot Chili Peppers as part of the band tonight.

Most of the songs at this point were acoustic with no drums. It was a mellow start, but still, this was Patti Smith! We were all wedged in like sardines, the temperature was hot hot hot… You could barely move.

I’d never seen Patti Smith before, and like some people told me, she has tremendous presence. Even though the songs at the beginning were not rockers, you couldn’t take your eyes off her. She worked the stage like a seasoned pro. Really cool, quick with one liners and very raw and real. She didn’t talk to the crowd as much as she connected to us with her emotions. Whether she was talking about the song she was going to sing or about her memories of CBGBs, it’s as if she was spilling her guts out to us. 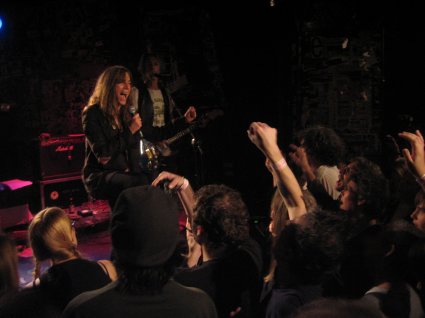 After 8 or 9 songs, she took a short break, changed clothes, came back on and this is when they show took off like a rocket. This was the Patti I wanted to see. The harder Rock material began. She was like a wild banshee, flailing around like a preacher trying to convert her disciples into the church of rock and roll. I wish I had the set list, so I can only name some of the songs she did off the top of my head.

Marquee Moon, My Generation, Pale Blue Eyes, Gimme Shelter, Without Chains (a new song), Sonic Reducer, Pissing In A River, For Your Love, Redondo Beach, Birdland, Free Money, Space Monkey, Ghost Dance, Rock And Roll Nigger (a high point mid-show!), So You Want To Be A Rock And Roll Star, a Blondie medley, a Ramones medley, and I forget the rest. It’s all a blur to me now.

I felt like part of the furniture in the club; we’d all been there so many hours pressed up against each other. I was really getting tired, I’d been on my feet for six hours, I was hot, I’d almost gotten into a fight with an asshole that was pogoing into everyone and pissing everyone off. I felt that I might pass out from the heat and the aches, but I did not give in. I had to be there. This was history.

She went into “Land” and if it was possible, it upped the ante even higher and the electricity in the club shot up. Was this really happening?

When suddenly, Johnny… Gets a feeling… He gets surrounded by…

Was this the last show anyone would ever see at CBGBs? Was this really happening?

The walls were shaking with the music (especially Flea’s bass), and a bit of debris fell onto my arm from the ceiling or wall.

Then they launched into “Gloria,” but skipped the slow beginning of the song, so the pace from “Land” was not lost at all. This was the song that first got me into Patti Smith and to hear her do this song from Horses at CBGBs on this night was powerful and magical.

People were crying happy and sad tears. That this performer was closing the club’s last night, after first performing here when she started out in music. 33 years later and the book was closing on CBGBs. There were teens in the audience, there were people in their 30s, 40s, 50s, 60s… Generations spanned the room last night for CBGB’s last stand.

For the final song, Patti chose “Elegie” and before she began it she read a list of names of people that were no longer living that she felt were important in the history of CBGBs, rock music and her life. Bryan Gregory, Lester Bangs, Helen Wheels, Robert Quine, Johnny, Joey and Dee Dee Ramone, Richard Sohl, Lance Loud were a few I recall. Then she began the song. Towards the end, she got very emotional and it was easy to see she was in tears. This was really it. The end of an era. It’s the end. At the end of the song she began to wave goodbye, and we all waved goodbye to her. It was surreal. It was like 1976 and 2006 had blurred into some sort of time/space vacuum…

I stumbled out of the club onto the Bowery, exhausted, hungry, thirsty, with throbbing feet, where hundreds of people were still outside waiting to get a glimpse of Patti and CBGBs before it was shut for good. I got a cab to go home, and said my last goodbye to another NYC landmark gone forever.

Words and photos by Russ Turk. See more photos from this show.