Who knew? According to the New York Times, people are listening to a lot less radio than they were ten years ago. It surprises me that they’re still listening at all. But apparently, radio has slipped a lot more when it comes to college graduates:

Over the last decade, college graduates ages 25-54, who make up an increasingly large portion of the population, have abandoned radio eight times faster than nongraduates. Today, they listen to 15 hours and 45 minutes of radio a week, while their peers without degrees listen to 21 hours and 15 minutes weekly.

A pointless graphic in the piece points out that weekly radio listening has decreased 240 minutes among folks with a degree while it’s only decreased 30 minutes among non-graduates. The article blames the discrepency on the types of jobs people do, but I wonder how much it has do with iPods…

END_OF_DOCUMENT_TOKEN_TO_BE_REPLACED

Ever since I first peeled back the plastic wrap from a cheap store brand cassette and dropped it into the small personal tape recorder I got for Christmas in 5th grade, I’ve been fascinated with the art of the mix. Back then my main piece of gear was an Emerson single-speaker recorder with thick buttons that required my tiny fingers to depress PLAY and RECORD together to engage the recording head.

My first mixes (which I still have somewhere) were mainly comprised of songs taped from WGRD, the Top 40 station in Grand Rapids, or the new and exciting music channel that had just launched, MTV. The pacing of those early tapes is jacked and the songs are often clipped or include the tail of a DJ’s talk-over. I just couldn’t get those chunky buttons to come down precisely together. Then I discovered the mechanical genius of the PAUSE button and my world changed. It was my first understanding of technology as a means to create something.

The years went by and I graduated from that Emerson to a “Ghetto Blaster” in junior high to a Fisher rack system with dual cassette in high school. The receiver and speakers were actually decent and loud as hell (much to my mother’s chagrin), but the tape deck was worthless. I soon gained a reputation among my friends as producing the lowest fidelity mixes in town. As my musical interest turned to garage rock in college, I was able to pass off mixes made on my shitty deck as purposely lo-fi. I had to make due with the technology I had.

END_OF_DOCUMENT_TOKEN_TO_BE_REPLACED

Daily Show correspondent Rob Corrdry Rob Corrdry puts his iPod on shuffle and exposes his inner indie rocker: “I hate that Weezer hates Pinkerton. That’s my favorite Weezer disc, and I hate that they won’t play it live. It just makes me hate them.” Pavement, Barlow, Gerbils, Low? Dude’s a regular music snob geek! Via lhb.

What do you do when you plunk down several hundred dollars on media players that shit out on you within 18 months? The only thing we, the people, can do in Corporate Amerika: Complain.

To whom it may concern (and that should be anyone who works at Apple),

I know most consumer protection agencies recommend a calm, non-threatening tone be taken when filing business complaints in writing, but it’s awfully difficult to maintain a cool composure when you’re staring at $800 worth of electronic equipment that’s up and crapped out short of 18 months from the purchase date. But I’ll try to be the bigger man.

END_OF_DOCUMENT_TOKEN_TO_BE_REPLACED

Audiophiles Become Ipodiophiles: “The quality of the components used in the iPod are on the same level as low- to medium-priced audiophile gear. From the audio standpoint, iPod makes a very good source.” The iMod hack seems a little bulky for the commute though…

Apple v Apple, Round 2: John Lennon invented the iPod! Who knew? Via sg.

END_OF_DOCUMENT_TOKEN_TO_BE_REPLACED

The RIAA now says ripping CDs to your iPod is not Fair Use. Rip this, motherfucker. 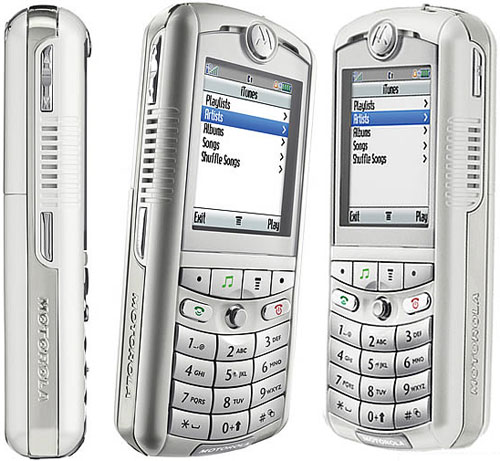 Battle for the Soul of the MP3 Phone – How the cell carriers, the record labels, the handset makers, and Apple sabotaged the ROKR.

Apple iTunes phone due to launch – Stick a camera in it, and we’ll have everything we need in a single gadget. Next step: implant it in my forehead. Update: Why it sucks.