Video: She & Him – Don’t Look Back from Merge Records

Good heavens, just when you think there’s no way that Zooey Deschanel could possibly get any cuter, she releases yet another video that ramps up her adorability factor once again. I’ve recently been revisiting Nancy Sinatra’s catalog for the first time in a while, and She & Him definitely fit within that tradition. This video premiered on Design*Sponge, which makes sense considering the props, but who can pay attention to the furniture when Miss Zooey is doing the Shimmy?

She and HIm: iTunes, Amazon, Insound, eMusic, MOG, wiki

She and Him: iTunes, Amazon, Insound, wiki

END_OF_DOCUMENT_TOKEN_TO_BE_REPLACED

• The White Stripes, ‘Under Great White Northern Lights’ (through March 21)

And AOL/Spinner is streaming the following new releases through Sunday, March 21:

END_OF_DOCUMENT_TOKEN_TO_BE_REPLACED

I don’t think it would be possible for Zooey Deschanel to be more adorable than she is in this video for the first single from Volume 2, due March 23 on Merge. I mean, come on. You better treat her nice, Gibbard—that’s all I’m sayin’…

She & Him: iTunes, Amazon, Insound, wiki 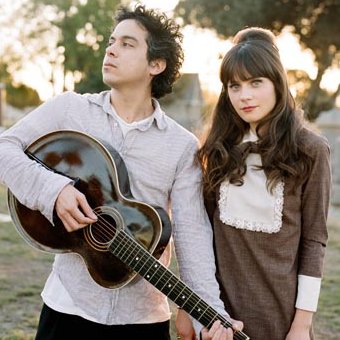 At the end of the year, we’re offering up some MP3s that we never got around to posting for one reason or another. She & Him is Zooey Deschanel and M. Ward. And even though she’s an actress in real life, they made a real nice record together.