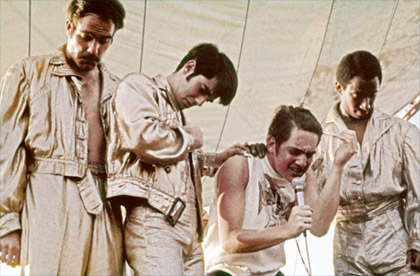 END_OF_DOCUMENT_TOKEN_TO_BE_REPLACED

This “rarely seen” video may not be “official” but it was passed along via Sub Pop’s Twitter feed, and it’s pretty cool. Dudes are young.

As a big fan of straightforward pop music “About a Girl” has always been my favorite song on Bleach, and remastered by Jack Endino, it sounds better than ever. The 20th Anniversary Edition adds a 1990 live set recorded at Portland’s Pine Street Theatre. And here’s a track from that.

Don’t blame Nirvana for all the awful bands who attempted to copy their sound.

END_OF_DOCUMENT_TOKEN_TO_BE_REPLACED

Consider. While there is certainly a percentage of rock in its multitudinous forms that is all about being pissed off and rebellious, about being disaffected and morose, about being loose and large, a greater percentage, arguably, is about relationships. Love lost. Love won. Love unrequited. Love that’s not really love. Love that dare not speak its name. Love sought but not found (which can lead to many of the feelings previously mentioned, as in pissed off, etc.).

Music (let’s stop using the word rock here as it can be too loaded as it can encompass too much, and the more generic term allows the focus to be on the argument, not the terms thereof) to a teen helps describe and define relationships or the lack thereof. Say you see a person of the opposite sex for the first time and you are immediately smitten. Chances are, if there is music playing, it is a song that you’re not likely to forget—at least not unless or until you meet someone else who wipes away the memory of the first one. Say she—and, yes, I am exhibiting my bias here, just to make this less prolix—has a song that’s her favorite. Now depending on your taste in music, there is a good likelihood that that is going to be among your favorites, as well. If you find it to be completely abhorrent, chances are there are going to have to be some rather significant factors that are going to overcome what you now know is a horrible taste in music, as you ask yourself: “If she likes that, what else can she possibly like?”, a question that causes your eyes to go wide with fear, despite the fact that you are talking to yourself.

END_OF_DOCUMENT_TOKEN_TO_BE_REPLACED 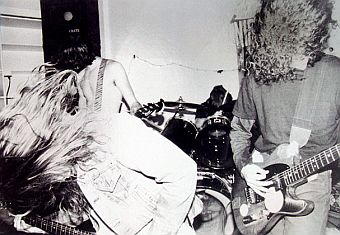 END_OF_DOCUMENT_TOKEN_TO_BE_REPLACED

The NME reports that Nirvana‘s notorious 1992 Reading Festival appearance will be released on DVD this May. Titled Life Takes No Prisoners, the disc features 27 songs, including covers of Boston‘s “More Than a Feeling” and “The Star Spangled Banner.” There’s no US release date nor a listing on Amazon as yet.

Track listing after the jump…

END_OF_DOCUMENT_TOKEN_TO_BE_REPLACED

Kurt Cobain was such a fan of this Scots band that he recorded covers of three of their songs: this one, “Jesus Wants Me for a Sunbeam,” and my all-time favorite Nirvana song, “Molly’s Lips.” Enter The Vaselines is a remastered collection of pretty much everything the Vaselines did, including “never-before-heard demos, and live recordings from 1986 in Bristol and 1988 in London.”

END_OF_DOCUMENT_TOKEN_TO_BE_REPLACED

There’s a ton of fascinating information in the state of Washington’s Legacy Project’s oral history of Krist Novoselic (93-page PDF). For example, his name, if spelled the traditional Croation way, Krste, should be pronounced like “cursed.” And his last name should be pronounced “No-voss-o-litch”, although Novoselic himself pronounces it “Novo-sell-itch.”

Tons of cool stories about growing up, listening to music, moving to Croatia when he was 15, Nirvana (of course), and his political activism now. It’s a great read.